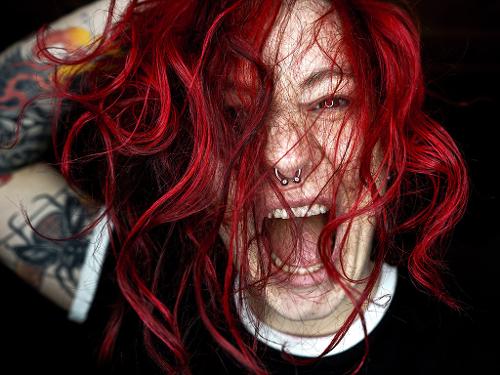 MISTER MISERY is an upcoming metal band from Stockholm, Sweden. We met the guys at this year’s Summer Breeze Festival in Dinkelsbühl to talk about the bands style, music and their upcoming album “Unalive”. This band has a really refreshing sound and catchy Metal-Gothic visuals which make them unique in their own way. 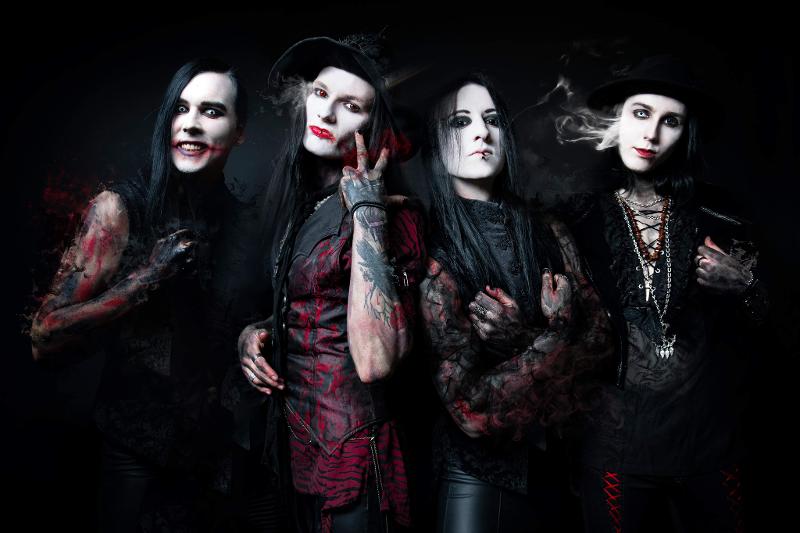 Kristina: Today we have a special interview with a new and upcoming band called MISTER MISERY from Stockholm, Sweden. Hi guys! How did you meet and how did the band project evolve?

Alex Nine: In late January 2018 I got a message from Harley after he just came home from Los Angeles where he studied music for two years saying “Hey, I got a couple of songs and I’m looking for a guitar player. Would you be interested?” I declined five different bands before MISTER MISERY came up because I didn’t like it in the past. I heard two songs Harley sent me, and I was like “Wait a minute! This is what I’d be waiting for!” That’s how the band started.

Kristina: You guys have known each other for years then?

Alex: No, we have never met before.

Harley Vendetta: I came back from LA with an idea and a bunch of songs and I wanted this idea to become a band – the best band. So, I contacted Gabriel, the new singer of CRASHDÏET. He knew one guy that knows how to play technical metal guitar, this was Alex. I contacted him and we basically fell in love with each other.

Kristina: Tell me about the bands style – from the outfits to your genre. How would you describe your band to someone who has never heard of you before?

Harley: The style comes from the fact that we want to look like Rock stars. I wanted people to spot us and say “Those guys are in a band. They look cool, they have great looks.” Our style comes from the love to Tim Burton-movies, and that goes for everybody. We’re all wearing stuff from Punk Rave, because I was thinking: “What if we dressed up like sexy vampires with a lot of make up on to get the look?”

Alex: About the genre: If we wanted to describe it to someone it would be Alternative Gothic Metal, but not Gothic in common sense. It definitely has Glam vibes in it.

Harley: It’s interesting because I hate talking in subgenres, we are playing Metal music. We have a Gothic style and we sing about everything: Like real life issues, fiction, mental health issues and so on. I don’t want to place our band in any genre, it’s Metal but not any subgenre.

Alex: When the album comes out it’ll make more sense, it’s a bit of everything on it but it binds together really well.

Harley: If I had to give a reference, it would be AVENGED SEVENFOLD. We’re still different, but this is how close it gets.

Kristina: Compared to your music, AVENGED SEVENFOLD are more into Metalcore, right?

Harley: Yes, not now but they were, I think. But that’s where it comes from. They said the same thing back then that they wanted to produce any kind of music in their sound and style.

Kristina: What are you doing at Summer Breeze 2019 as you’re not playing on stage this year?

Eddie Crow: We are here for PR stuff and hanging out, meeting fans and having a good time.

Alex: The main story is that we’re here with our record label Arising Empire and Markus Staiger from Nuclear Blast. When he signed us, he tried to get us in to Summer Breeze this year. They were already fully booked for 2019 so they decided to get us here for a promotion weekend, meeting the press, connecting to people and bands.

Kristina: How did Markus Staiger discover you guys?

Alex: Thomas from the UK TV show “Top Of The Pops” listened to our music one and a half years ago on Spotify and recommended this to Markus Staiger saying “I think this is the band you were looking for!”, so Markus contacted us. This was pure coincidence and that’s the story. We are really glad that it happened!

Kristina: Back then it was only the three of you with another drummer. How did Rizzy join the band?

Rizzy: I was given a call from Alex this spring. I had my own band at that time, MARK ZERO, but they weren’t that active at that time. I decided that I wanted to play more and just do something. When Alex contacted me with all the details about the label, I decided to join that trip.

Kristina: I always starts with a “Hi”.

Rizzy: Of course, I was like “Sure, send me some songs”. It wasn’t my genre at first and I had to work hard on the songs drum vise.

Alex: I must add something here. When Rizzy got two songs and we knew that it wasn’t his genre – after three days without any notes he sent us two videos playing the songs just by hearing them. We were blown away and thought: This is our new guy, we found the best drummer in the world!

Rizzy: And I was like “I’m gonna tackle that one by a 100%!” A week later Alex called me that they wanted to come to Gothenburg to have a chat and do a rehearsal together. It just clicked when we played the songs and I felt good about it. From there we played a couple of shows and rehearsed together. Being here at Summer Breeze still feels overwhelming, I don’t get it yet. Probably in one year I will, but I’m so happy with it right now.

Kristina: You have been playing in other bands before. Would you say that MISTER MISERY is the best project so far for all of you?

Harley: No, it sucks… (laughs) No, for real, it is the best project so far. Our previous projects weren’t bad at all, but this formula just seems right. The four of us match together well.

Alex: Yes, it’s a lot about the members. I myself tried to start up bands in Stockholm for about six years. I always ended up with the wrong people who just wanted to do it for the image and because it’s cool. It was only for the girls and the booze. They weren’t dedicated enough. When Harvey contacted me, I felt that this might be the best project that I’ve ever gone into.

Harley: The music is the most important part in it, that unites us. We just love it.

Alex: We live in different cities, this makes it more difficult to meet and rehearse together. When we meet it’s always about the band because this it so important to us.

Harley: People always ask us how we keep it together. I think this also shows that we are dedicated although we live so far apart: A three-hour-trip doesn’t matter when you love what you do.

Alex: We also moved the rehearsal location to Gothenburg because of Rizzy. I spent over 500€ on train tickets only this summer out of my day job.

Rizzy: And we’re always connected through our band chat where we communicate a lot. 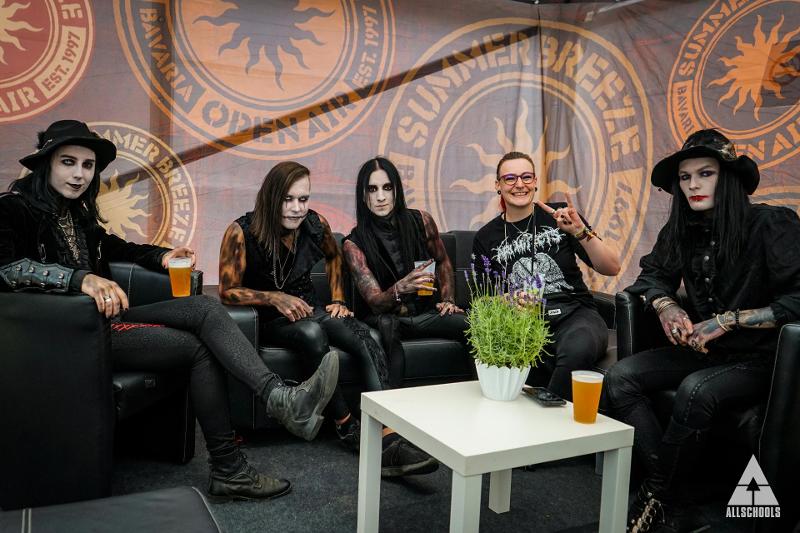 Kristina: Let’s talk about your first single “My Ghost”, I liked to spooky text! Tell me more about it.

Harley: I wanted to have a ghost that haunts a person. The ghost is so into the haunting, that’s where the concubine-line comes from. The ghost does whatever it takes to get to this person. It’s a song about entertainment and about a horror story. It will make more sense when the album comes out, trust me.

Kristina: You already have a release date for your upcoming album, right?

Alex: Yes, it’s October 4th. The name of our debut album is “Unalive” and it contains ten songs.

Harley: We also have an eleventh song on it for a Japanese version, it’s an exclusive bonus track.

Kristina: I hope to see you guys play at Summer Breeze next year, this would be awesome!

Alex: Yes, this would be great. There’s also a cool tour coming up this autumn, we’re so excited for it!

Kristina: This sounds awesome! Thank you so much for the interview, I’m excited how far you will get with MISTER MISERY. Keep it up!