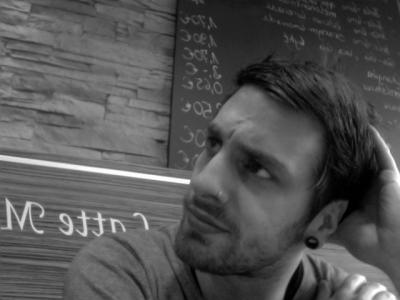 17.05.2010
Hey! This is Alex from Allschools Network. Thank you for taking the time to answer to a few of my questions. I hope everything is fine. Could you please at first introduce yourself?

Wes: Hi, Alex. My name is Wes and I'm the singer and guitarist of Name.

Jeremy: And I'm Jeremy, Wes's brother and bassist of Name.

„Internet Killed The Audiostar“ is finally released! What kind of feeling is that and are you content with the result?

Wes: Its an incredible sigh of relief. It took so long to put these pieces together. Over the course of 4 or 5 years, we hit so many obstacles that held us back from finishing this record, that we started to think it wasn't going to happen at all. We wanted to get this out so badly, but we didn't want to rush the process, or else we would've just been unsatisfied and it would've defeated the purpose. But, to make a bad situation good, we managed to use that time spent and make a record that is almost the soundtrack to the trials and tribulations of us together and individually over the course of 5 years.

I still ask myself if the title of the album is a tribute to the Buggles „Video Killed The Radio Star“. Am I right and what was the idea behind that title?

Wes: The title is a play off of the Buggles song, yes. When "Video Killed The Radio Star" came out, it land marked the changing of the tide. The music industry, ethic, and aesthetic all changed practically over night. With the current state of music, we figure we'd just come forth and basically say "hey, we're all aware this is happening, so knock your bullshit off". We're just offering the moniker as a title to a new chapter.

I must admit, I was a bit over challenged by reviewing your album and I am very sorry, that I chose the words: „Name are assholes, because they play with my intellect and dismantle me without a warning.“. I hope you can live with that. Could you please try to explain to the people that have not heard of you yet in a few words how „Internet Killed The Audiostar“ sounds like?

Wes: Haha thats amazing. I haven't actually read your review yet, but I definitely will now. I'd rather get that response from the majority then grotesque confusion without any willingness to open their mind. But, I guess, if I had to say anything about what IKTAS sounds like, I'd say "chaotic easy listening". An amalgam of everything we've enjoyed in live, not just music. So have an open mind when listening, or I guarantee intense bleeding from the eyes and probably an annoying bowel movement.

During listening to the album, I saw myself in a white room wearing a straitjacket. You were some kind of, yeah i think, monsters, which tried to destroy me with their music and behaviour. Do you see yourselves like that, too?

Wes: I don't see us so much as monsters, as I see us like obsessive, pussy, pale skinned vampires with massive foreheads that are undeniably uncomfortable for others to look at... Either way, I see us doing damage to various groups of the music scene.

Let me ask you a few questions referring to the album. My first one would be: Why did you divide „Empathic Communicator“ into four parts instead of putting a song of like 20 minutes on the album?

Jeremy: We did that for a few choice reasons; One being that we understand that the attention span of most people here on planet Earth has significantly diminished in the past few years with the development of modern technology at such an exponential rate, that can lead to distractions and what not, so by splicing it up into 4 parts gave the listener the choice of selecting the tracks that pertained to their mood, or gave the option of skipping through the "chapters" of the track. Because the song is a lot to take in at once, and we understood that. Secondly, we wanted to give 4 separate identities to the songs, they all are pretty different and it tells 4 different perspectives of one culminating concept.

I guess your inspiration comes from a dozen of different bands, musicians, experiences and so on. Your sound tells me that you do not want to stagnate in one genre and that you try to blast some barriers. But could you please name at least three of your most important inspirations for the music and the lyrics as well?

Jeremy: First and foremost we would have to say that one of our biggest inspirations to do anything, musically and lyrically would have to be George Carlin. He came from a place of reasoning, facts, cynicism, brutal honesty, and a way of crafting himself that could command an audience and make sure you knew what it is he was feeling and why he was feeling it. Also he was always shifting in his stand up where he could go on a serious tangent that would be offensive to most, and then offset everything by saying something completely off the wall without any transition or reason why, yet you were already captivated by his words. That kind of feeling is what we're trying to do with our art. Oh yeah, we get inspiration Tom Waits, and Pink Floyd...because they're fucking awesome.

Hands down, how many parts of your songs were really planned as they sound on the record and has there been some kind of improvisation during the recording process? I´m not a musician but I can´t imagine, that everything of „Internet Killed The Audiostar“ was written in stone before you entered the studio, it´s just to screwy.

Jeremy: We had most of our songs and ideas already worked in before we had entered the studio. Some of the songs we've had for years, but decided to give them a sonic overhaul so it depicted where we are now rather than looking backwards. For example, the song "The Spark Of Divinity" was written 7 years ago, we've been playing it for so long, but we knew it was a good track, so we dismantled it and found this combination that worked and wanted to have it sound the way we do live, after playing it for so long. We're very meticulous with our sound, and sometimes it takes us a month to write 30 seconds worth of material, and other times it took us 1 day to write 2 songs. Your creative mindset can play tricks on you. But to be honest, most of the material was already written. I mean, of course the studio can act like another member of the band and gives you room for even more experimentation and development to put ideas into fruition. We like to mess around with sonic layers and weird recording techniques, but that's about it. The ground work for the album was already solidified going into the studio. It wasn't easy by any means, but somehow...we did it.

How long did the recording all in all take and how was the time in the studio? Fun or even hard work?

Wes: The recording process was an interesting gem. It seemed to span a lifetime because of how overly meticulous we are. Their were definitely fun times because its such an exciting platform for this band to finally give a heartbeat to these songs. We're birthing a new chapter into our lives, so we take it very seriously. But, we can't help but have fun with the energy in the room. It boiled down to 70% work, 30% pure fuckery. As Jeremy mentioned early, we like to take advantage of the resources of the studio, so to showcase our personality as honestly as possible via the music, we knew we needed to take a step back, relax, and re approach the pieces. Over all, the entire process was fun, but if you became a distraction, we'd eat you alive.

One user of our webzine said that your album is way better than the new Dillinger Escape Plan album called „Option Paralysis“. I think this is a great honour. But what do think about this statement?

Last question: What are The Sycophant, The Saint & The Gamefox and what the fuck have they done with Dave Mustaine in my white cell?

Wes: They are the 3 stylists that keep his fiery, red, lava hair so shiny. Everyone needs a little suave in their metal.

Once again thank you very much for your time and I hope I did not insult you too much. Everything of this should be rated as a big compliment for an absolute incredible album. Thank you for that. Last words are up to you!

Wes: There's not a single fucking thing you could have said to insult us in any way, shape or form. We've had a blast with the interview and appreciate having a laid back approach. We're incredibly glad you enjoyed the record, but stop sucking our dicks so hard. Just joking.. Or am I? Anyways, spread the joy and majesty of the album to all of your cohorts. Everyone, give the album a chance and listen with an open mind. Also, follow us on all of forms of social networking over at http://www.facebook.com/nameband, http://www.myspace.com/name, and http://www.twitter.com/name. Add us on those pages and talk to us. Give us something to do on these websites other then become sexual predators. Cheers.