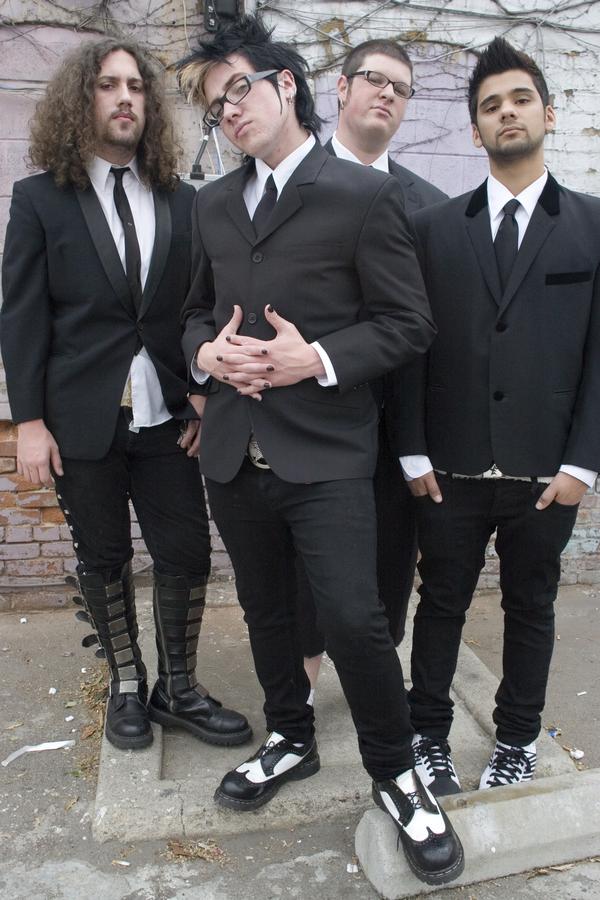 When you released your Hellcat debut "Welcome To The World Of?" you
Have just been around 16 and 17 years old. How did you personal lives changed since then?

Well my social life has actually gotten even more relaxed, I'm just completely dedicated to becoming a successful artist and better musician and songwritter. I'm always writing music or playing shows and rehearsing so I rarely go out that much with my friends. But when I do I always have a blast! I defiantly get recognized a lot more, that's really cool. Its great to meet the fans that pretty much made you! And even when I do reach my goal, I probably wont change haha. From what I heard from the other guys in the band, they were the most popular kids at their schools. Hoorah for the underdog!

You combine a punk mixture between L.A. and UK punk styles. Having influences from THE SEX PISTOLS to SOCIAL DISTORTION, how did you get in contact with that kind of music? Kids of you age tend to be more influenced by that bubble gum pop punk style of punk rock. 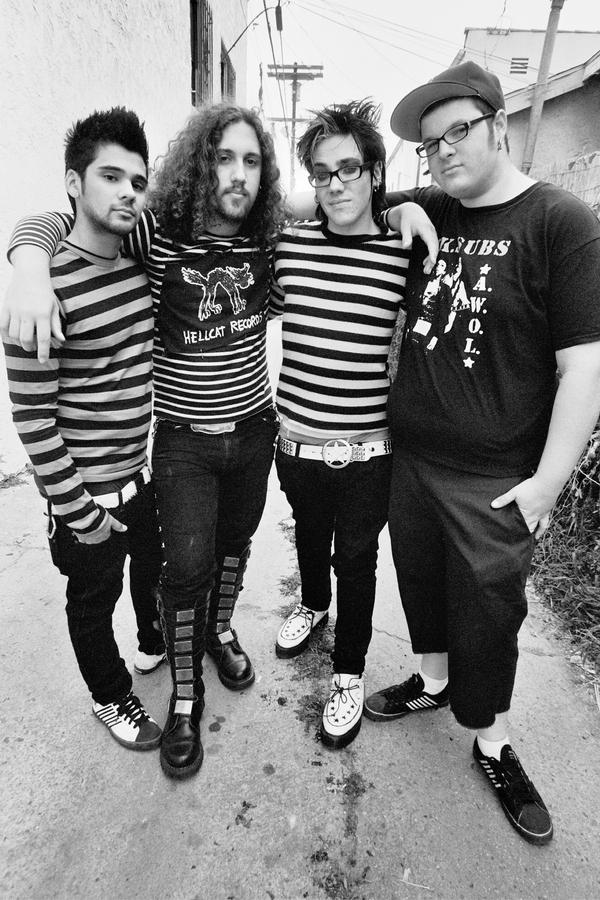 First off, were not kids anymore dude. Were all 19 and 20 now. No offense man, I just have to make sure no one thinks of us as 16 anymore. Anyways, funny you should say that because I actually do like what you call "bubble gum" pop punk. Though I hate bubble gum and refuse to chew it. (Comedy drum fill) ba-dom cha!

I saw Blur play when I was 5 and I saw The Sex Pistols play when I was 7 and they both had a huge impact on me. That's when I started to get interested in Music. Then I got onto Blink 182, Sum 41, Green day, and at the same time I discovered Social D.etc. and truth be told its still my favorite. It’s the reason we started. As you get older you discover new things yet older bands such as Social D, Pistols, Sham 69, The Ramones, and the Clash and its great because there is so much great music out there to be discovered and uncovered. I take influence from everything from Frank Sinatra to Social Distortion and everything inbetween. I love mixing the old school punk and newer modern punk. Its much more fun that way. When I saw the Pistols a I went wearing leather pants and spiked up blond hair. I asked my dad to turn down the volume ha-ha, that's one thing I remember about that show. And watching Steve Jones flash his balls to the crowd.

Who exactly are your idols an did you get the chance to meet one of them?

I've got a couple and have had the chance to meet most of them and become good friends with some of them, its quite unreal really! I have met Deryck Whibley a few times, the first time he was a total douche and wouldn't talk to me but the 2nd time we met he was so rad and cool and we got along really well! That was a great day. And obviously meeting Tim Armstrong, Travis Barker, and Matt Freeman at the same time is still pretty much on the top of my list of "HELL YEAH!" moments. That was round about the time Tim wanted to sign us. I got invited to sit in on the making of the last Transplants record. I still get goose bumps thinking about how amazing that was. It was also the only time I ever got star struck and didn't say a single word apart from "can I help you with the dishes?"I got to know Rivers from Weezer
Quite well too..hes amazing.

If I could ask Billie Joe Armstrong anything it would be WHEN CAN WE TOUR WITH YOU!?

Playing a snotty punk rock mixture, do you guys have a problem with your credibility? As far as I know you are pretty well off and your parents provided the whole studio equipment and even paid for the production of the first record. 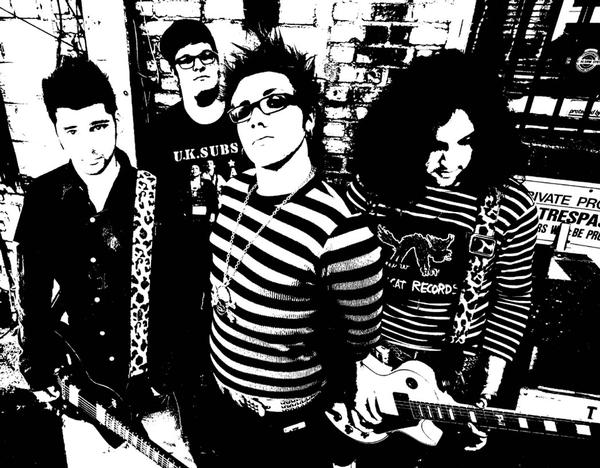 I don't know where you heard that but its totally untrue. Our parents have always been very supportive but they didn't pay for our records, Hellcat did that. We even paid for our demo using money we had won from winning "battle of the bands" contests. As for cred, we've had no problem. People respect you for who you are and that's what its all about, being yourself and no tending to anyone's needs to gain popularity. Its not about what you got or what you don't got, its about the songs. And its about what the songs make you feel and how you can relate to them. If you got a problem with me because I don't dress how you want and don't have a Mohawk anymore or I don't meet to your punk standards, then the only thing I can say to those people who would judge you from that would be fuck off and eat my shit. Is that "punk" enough ?

Are you still going to school and how do you combine you life as a musician and your daily duties?

Jack and me dropped out when we were 16 to concentrate on music Zak just graduated from online school. Jon is 20. So we don't have to balance school with music! its gonna be really great to finally tour with the release of the new album which we couldn't do last time. My advice? Just watch the Simpson's, I learned more about life from that show than I ever did at school. 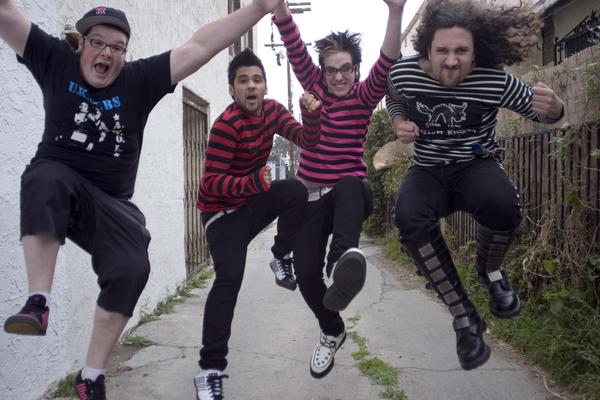 Where do you see the differences between "Welcome To The World Of?" and "Escape from L.A."?

First off, all the songs on Escape from L.A. Have a strong story line, each song has an interesting story behind it with twists, turns, and sometimes naked women!. The first album was completely based on the concept of possitiviy and better days. It was a truly hopeful album. This one is just a little more realistic. I've gone through so much crap since "Welcome to the world..." came out, some really awful things have happened to me and my family, but at the same time I also had the best times of my life so far! So all of it is in this album. The good, the bad, the ugly and the girl that got away.


Do you really want to escape from your hometown? What do you like, don't you like there? 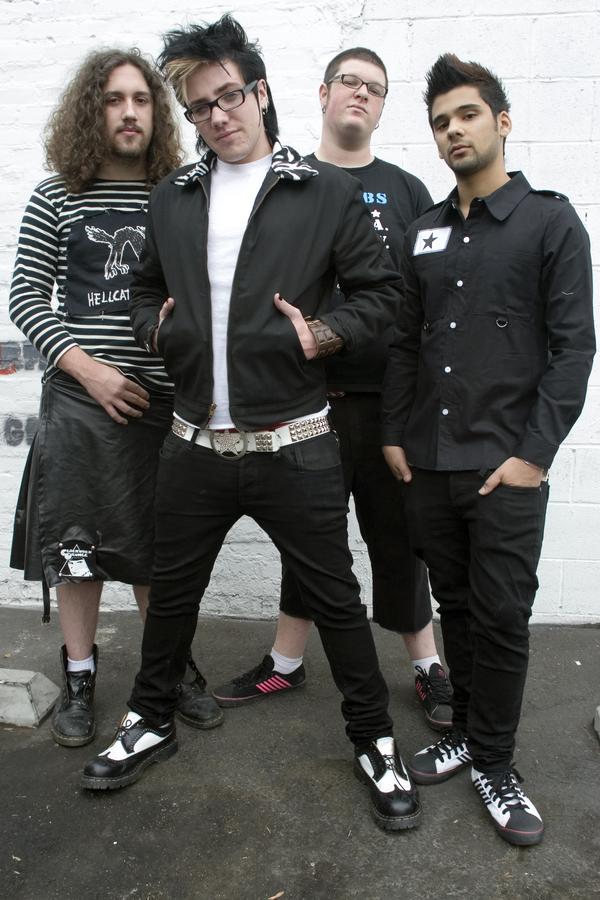 Dude, L.A. is just fucking boring most of the time. All there is to do here is get drunk and make sure the cops don't catch you. Everyone is an asshole and their so into themselves its disgusting, even when your driving and want to get into the next lane the cars SPEED UP so you cant get in front of them because god forbid you make them .23 seconds late for that appointment with their plastic surgeon!. To make up for that there are a lot of things I do love about this place but the main thing I love are my friends, I just spent a few days in Vegas with my best friend Spencer Brock (he's a kickass producer/engineer and drummer by the way) and it was just THE BEST TIME EVER MAN! We went to gigs, shows and hired some really bad hookers. We arrived with a lot of money and came back with nothing!. It was the perfect Vegas experience! So I have made some great friends and met some great people here that really do make up for the oppression that every under one 21 feels here. I'm sure as soon as you turn 21 L.A. Is probably quite fun.

What about your future plans?

Well I'm already working on album number 3! Henrick from Horrorpops is going to record a couple demo tracks and we shall see where the wind takes us from there. But till that comes, all we want to do it push THIS album to its limit. Take it as far as it can go and push it even more. I want to make sure Orange becomes a bigger name with this album. 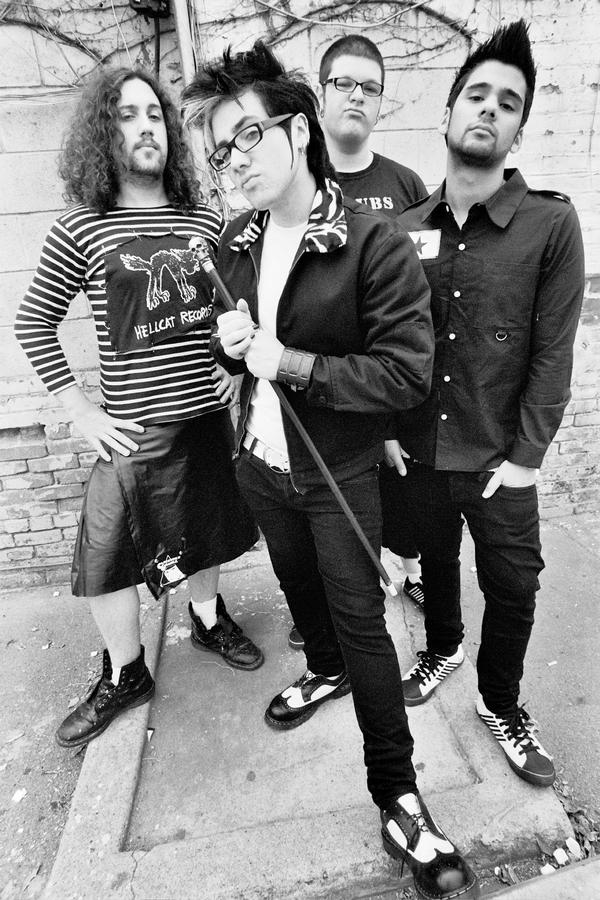 What do you think about Christian rock music?

Mike Valentine recently left ORANGE. Was he still involved in the recording of you new record. Why did he leave and do you already have a new guitar player?

Mikes departure was really hard for me to deal and cope with, he's been my best friend since I was 9. And now I never see him anymore, he's doing film school full time now and I'm busy making music. It sucks that we never talk anymore, but maybe we can rekindle that friendship. We auditioned lots of new guitar players but the best fit was Jon DeRing. He had roadied for us a few times and was already a friend

Our new album "Escape from LA" comes out Sept. 11th - If you've ever lost love, if your pissed off with living at home and want to run away forever, if you feel like your the "only one" in the world, or you feel that you have found what you have been looking for all these years and your floating on cloud 9 BUY THIS ALBUM. Because it was written for ALL OF US. And you are all on here. Not just me, but each and every one of you too. This is your
album, remember that. This one is for you guys.