27.11.2006
Weve already seen you a few months ago in Bremen. During that Tour You played several headliner shows. Whose idea was it to play some shows on your own without any support? 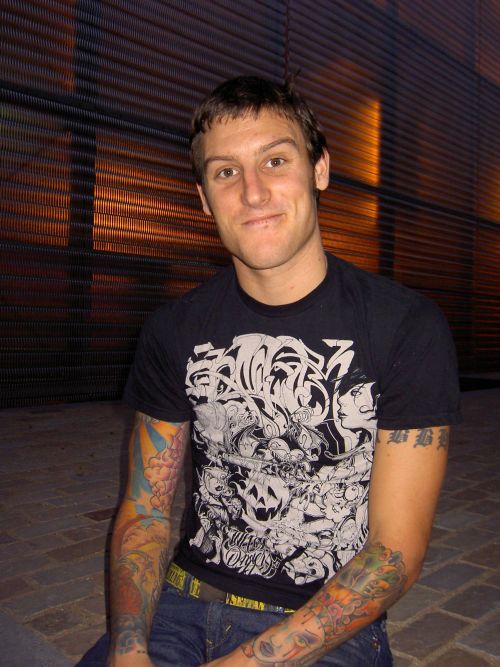 Winston McCall (vox): Originally we were supposed to do a tour with The Chariot. We were supposed to support them. Everything was booked already, but then the tour fell trough. Instead of loosing it all by cancelling, we had to do it ourselves. We just came over and did the shows and we hope we did it well anyways. For us the shows were really fun, so that was good.

At the moment PARKWAY DRIVE is really big in Germany

Yeah, you are compared to bands like HEAVEN SHALL BURN or UNEARTH

You have just been signed to Epitaph in the USA. How did you get in touch with them?

So they just invited you to come over to the states?

Yeah! First they said theyll release a CD, which was already amazing. Than they booked us a few shows and then we booked ourselves to do some shows on the west coast as well. First, of cause, we had to go and meet with the headquarters and sign on.

Killing with a smile is out in Australia for a year already. It has been released in Europe in June and now in the States just recently. Are you already writing new material?

Yeah. We are. When we have been touring so much the last time we had really little time to write stuff, but we had about three weeks off when we were in the UK before going to America and we did around five or five and a half songs. Hopefully well get to do some more when we get home and hopefully they will get cool. Well be touring again around March or April next year and hopefully we have a new record out by then. And this time the record will come out the same time all around the world, rather than different times in different countries. Because that had made it really difficult for us.

So, do you know if Epitaph is going to handle the worldwide release?

I think Epitaph is going to do the United States and I think we are still doing Resist in Australia. And in Europe its gonna be Burning Heart, since they work together with Epitaph.

I just heard today that Steve Irvin, the Crocodile Hunter died in an accident. What do you think about that?

Definitely. He is crazy and stuff, I mean, not really crazy, he just did crazy thinks, but he is he was a really really good guy. With all the stuff that he did for the environment and its worldwide protection Its really strange to think of him as dead, cause he was really going!
Its really sad, Ive said something every night on the shows since Ive heard. Some people would laugh, some would clap yeah its kind of weird.

I heard some people say like, Yeah, that was supposed to happen. He was stupid anyways, to put himself on one level with all these wild animals

Yes, but I always thought, if he isnt killed by a crocodile by now, than thats not the way he is gonna die. But please, being killed by the sting of a rochen through the chest Thats ridiculous I didnt think that was even possible. He is probably one of two people to ever been killed by that

Ok, lets talk about the album again. You seem to like Bruce Willis, you have the Die Hard Sample 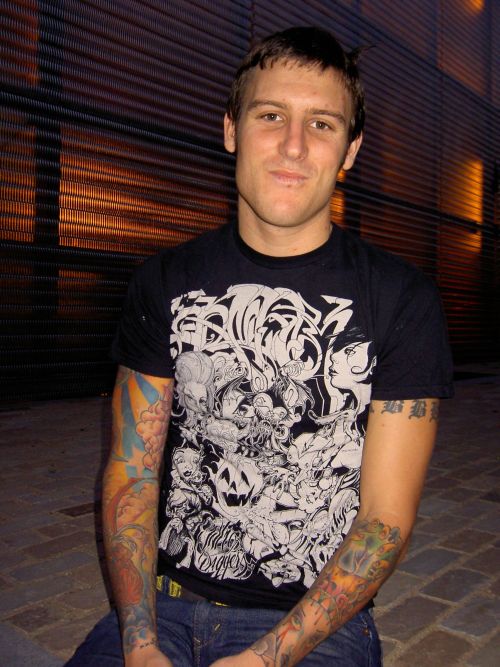 Yah, I like Bruce Willis, I like Die Hard  That gap in the song, I told him to write it exactly like that specifically, to fit in this sample. Just because I like it. but in the States we have taken it out, because of the copyright, otherwise we would get sued everywhere else it would be ok

Oh really, thats interestingSo what about So cry me a fucking river, bitch.

I dont know how that turned out actually.

No, no, its not broken hearted lyrics thats the thing! The whole song is really misinterpreted. The song is pretty much about dancing and jumping on the bandwagon while writing songs about committing suicide, cutting your wrist and setting up this whole fantastic image where being depressed and committing suicide is a good thing, like, is a trendy thing to do. And there are so many people, so many bands that do that just to grab fans and stuff. Thats why I wrote that song. And the thing is that a lot of these bands go out every night and sing this stuff and they have no idea what it is like to be heartbroken, except they betray this image. I dont know, I was just pissed of I guess. I think I just said it one time in a jam and it kind of fitted, so we stuck with it. And Justin Timberlake has a song called Cry Me A River hahaha.

I read that there is going to be a taste of chaos tour in Australia and you are also gonna be part of it.

Yeah, we are doing six shows in Australia at Taste Of Chaos, which is good. But No Europe. Weve had.. I dont know why, but weve had on every show weve played so far kids coming to us and were like: Oh, Ive seen you at Taste Of Chaos! And we always have to say Sorry, not possible, we are not doing it in Europe hahaha. Weird

I read on your album info-sheet, that your album is already really big in Australia. So, which slot do you fill at the Taste Of Chaos Tour?

I think we are opening! Which is fine. Im surprised we are not playing in the middle of the night. Considering that all the other bands that are playing are a lot softer than we are. Which is fine, too! I like playing with softer bands. Its just that we are not really fitting in Its going to be awesome anyway. A lot of kids.

So, in Australia, are there a lot of good bands, newcomer bands which look for a way to get big in Europe?

Yeah, there are a lot of bands in Australia, that are pretty much really really good, that just havent been heard about. Since its the other end of the world its really hard to hear from them except you see them on a show or something like that. But hopefully more bands will come over We are planning on coming back in February and we are gonna bring another Australian band with us. Its a start

I also heard that you are great soccer players

where did you find that out? [laughs]

you played against UNDER SIEGE. 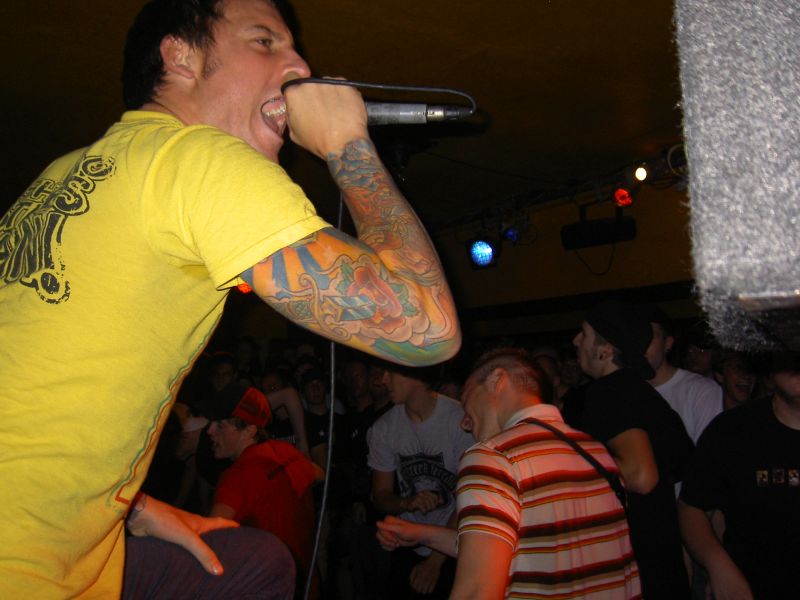 So what about a rematch?

Well, maybe Actually its not about to rematch its revenge!!! And a week before that we played against some English Kids and lost, so we still are pretty happy about winning.

You were only lucky winners, though

When you came over to Germany the first time, your bass player left in the middle of the tour and the merge guy jumped in. How did that happen?

Our bass player left because his wife was having a child. We knew about that for some time and so did he and he thought that he is gonna come back when he has the child. But the financial reality was that he had to work and touring with a band and going around the world that wasnt going to happen. So we decided together that he had to leave. And than we had one week to have our friend, who was the merge guy, to learn all the songs and to learn how to play bass from scratch.

So he didnt play bass at all?

He played guitar a bit But he had horrible timing issues, like he was so bad with timing, but he did his best and he ended up to be really good I mean, he is playing now, so

Jesus, I didnt think that was possible

Yeah, I didnt think so too, but apparently I mean, he is ok now And I would rather have a good friend like him playing in the band, even if he was horrible and luckily he got better, he hit me in the head a few times, though.

Yeah, we did. And we like to move around on stage. And he was just really nervous. He fell over the monitors and stuff as well A lot of entertainment..

Are you actually making a living of the music?

Well, we are making enough to survive. The band, right now, keeps us fed, it keeps our houses the band keeps us alive. As long as the band keeps going, we can survive, but we cant go home and buy cars and houses and stuff But I dont complain, you know Im in Germany, playing music! Thats awesome! Just like a giant holiday, we just need to play shows to keep going, which we like to do anyway

And what did you do before? Where you studying or working?

We all had jobs but when we started to tour, we all had to quit. I mean we had just six weeks off since than When the band started I was studying as well, but had to quit. These days its just playing, driving, sleeping, eating, playing, driving, sleeping, eating, playing over and over again, every day We make a lot of friends, see the world, so, thats cool.

How do you experience the differences between the German or European music scene and the Australian?

Its probably more different for us, than it is for you, because we listen to a lot of music that comes from Europe and the US, because there is such a big central basis for this common music. And there is such an established history. Like, we listen to HEAVEN SHALL BURN, MAROON, ARKANGEL, bands like that back in Australia. So we kind of knew what to expect. But actually, the rest of the scene is quite similar to in Australia and weve found that in America as well. The kids all dress the same, dance the same way. Bands act kind of the same on stage, the only thing is the accent, actually. Thats the only thing, that makes you realise, that you are not at home. And everyone is nice everywhere you go you make friends, which is really, really good. Thats pretty much it.

When can we expect new material again? Any new releases?

Well re-release an old CD that went out of press. An EP. And also there is going to be material from the Split CD with I KILLED THE PROM QUEEN on it as well as four new songs. Thats all on the back of the EP. I think that should be in October maybe. And hopefully mid-next year we will have a new CD out. Which will be good, because we get sick of these songs [laughs]. But I guess, its a good sign if they re-release the stuff, that means that people like it, so, thats good.

Ok, thank you so much for the interview.

Thank you and have fun at the show.