25.11.2006
The Regulations were formed in late 2002. In 2003 they released their first 7 on Puthrid Filth Conspiracy and in 2004 the 2nd 7 Destroy on Busted Heads. Both 7 got great reviews and the band made a name for themselves in the DIY Punkworld. In 2004, they turned down offers to sign with a bunch of bigger labels and opted to with newly started Ny våg Records.

The self titled full length was record in early 2005 together with Dennis Lyxzen (INC, The Lost Patrol Band, etc...) and was released in May 2005 to great reviews. The record was also released in the States by Havoc Records and in October 2005 they did a 6 week US tour. In August they hit the studio again to record a new 12--this time together with Stefan Granberg of Randy. It was released on Havoc during their US tour and is finally being released on Ny våg/ Cage Match in Europe now.

In Early 2006 Regulations was nominated for the Manifest award. The Manifest award is an alternative music industry Grammy, they did not win however. In May 2006, they will hit the road for their first proper European tour and later this year they will tour in Australia, Canada and Scandinavia.

Interview with vocalist, Marcus of Sweedish Hardcore band The Regulations.

Tell me a little about how you started out.

Marcus: Otto, Jens, and I started jamming together in late 2002 and after a couple of weeks we asked our friend Robert if he wanted to join us as a bassist. We worked hard down in the rehearsal space before our first show and then in early 2003 we recorded our first 7 EP. Were still the same members and were still working hard as a band!

What got you into Hardcore?

Marcus: I got in to punk as a little kid, because my dad used to listen to some classic punk like Sex Pistols, Johnny Thunders and Ebba Grön when I grew up. And when I was around 12 years old the Umeå hardcore scene grew bigger and bigger and I started going to shows. I also got to know some classic hardcore from skateboard movies. And since then Ive been stuck, and I still love hardcore and punk.

Your sound can be compared to early Hardcore bands such as Minor Threat in DC and Function in Huntington Beach, CA. Why would you say that is?

Marcus: I mean, our goal is to play straight up stripped down hardcore/punk and thats exactly what the bands did back in the late 70s and early 80s. We dont try to copy anything, but were obviously influenced by bands like Black Flag and Minor Threat.

What Swedish bands have influenced you musically?

Marcus: Were influenced by lots of music, such as old rock bands like AC/DC and The Jimi Hendrix Experience. As I said were influenced by old US punk/hardcore, but also by lots of old Swedish punk like Ebba Grön, Besökarna, Missbrukarna and Massmedia. I also get inspired when I hear some of the great bands that are around today like Gorilla Angreb, Hjerte Stop, Annihilation Time, Pissed Jeans and Government Warning for example. 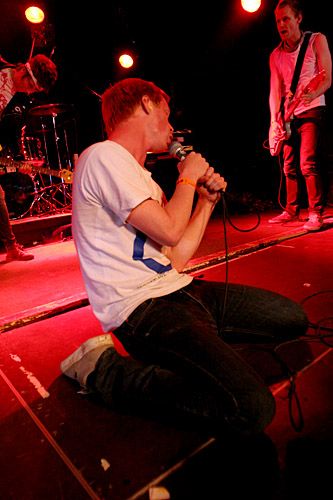 Is there a huge hardcore scene in Sweden?

Marcus: I would not say a huge hardcore scene, but its getting better, at least here in our home town Umeå. We have lots of good bands like The Vicious, The Rats, Dick Cheney and Insurgent Kid, and lots of dedicated people who set up shows and stuff.

Have you toured in the US a lot?

Marcus: Not a lot. We did a 6 week US tour in 2005 and we toured Canada for 4 weeks in October-November this year. Both tours were set up by Havoc Records whos releasing our records in the US. We love touring in North America so were definitely coming back next year.

Tell me a little about your song Police Sirens... what influenced those lyrics?

Marcus: Its not a specific event that inspired us to write the lyrics for that song. Its series of things happening to us and around us here in Sweden. I mean we all hate the cops and nowadays it feels like they are all around us trying to mess with everyone.

The song itself has such a flux of melodic switches as well as tone change, what influenced that original sound?

Marcus: We always try to do create songs in an interesting way, and I remember that we did work pretty hard to get everything together with that song. But nothing special influenced us musically when we did that song. I know that Police Sirens not a thrashy punk song like many of our others, but its just a good punk song to us.


Tell me about the label--how did you get signed?

Marcus: First of all, weve never signed a contract with any label or anything like that. We only work with people we know or trust. Weve done releases on different labels, but our main labels are Havoc Records in the US and Ny Våg Records in Europe. Missing Link records, who are setting up our Australian tour, are licensing our first CD down there and we think that they are doing a great job. Other labels weve worked with are: Kick N Punch, Cage Match Federation and Putrid Filth.

Tell me a little about your tour coming up in Australia.

Marcus: The tour is going to be a blast! Were really looking forward to play down there. I mean its a ones lifetime opportunity for us to go to Australia. Its almost as far from Sweden as you can travel. I dont know much about Australia besides good bands like AC/DC, Rose Tattoo, The Victims, The Saint and Radio Birdman and of cause the Crocodile Dundee movies ha ha ha!!!

What cities do you plan on playing, and what bands are you touring with?

Were going to play in Brisbane, Sydney, Canberra, Melbourne and Adelaide I think. And were doing most shows with Straight Jacket Nation!

Does the name Regulations have a significant meaning to you as a band?

Marcus: Were going to regulate you!

What are your plans for tour in the US next year?

Marcus: We wanna tour both coasts, but we dont know when or how. Its all really early in the planning. If you wanna keep updated check out www.havocrex.com

What's your favorite place to play?

Tell me more about your current album... the name of it and the tracks.

Marcus: Our latest album is called Electric Guitar and it was recorded in august last year. It was released by Havoc for our US tour and Ny Våg/CMF released it here in Europe early this 2006. In Europe it a 12 EP with 7 new killer song and in the States it also contains our two first EPs. Its great record, maybe a little bit more punk rock than the S/T album, but still fast and raw. The new tracks are
1. Untouchable
2. Laugh at me (ha ha ha)
3. Empty head
4. Disease
5. Hollywood smile
6. Protect and serve
7. I can't do whatever I want

Will you be recording another album soon?

Marcus: Were working on new material right now and already have some songs recorded. We dont know what well do, may be a 7 or maybe a new album. Well see. Were going to put lots of time and effort into making our next release as good as we can, thats as much as I can tell you right now.