07.06.2007
1. First, give our readers a short introduction of who you are and your area of responsibility in SANCTITY. 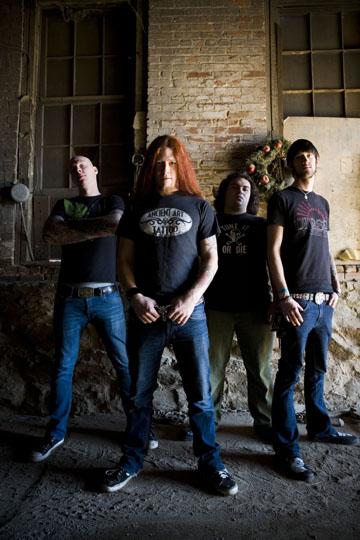 I AM JEREMY LONDON, DRUMMER FOR SANCTITY

2. Your story is one of these every kid, who´s jamming his guitar in his room and who would love to live through it, too. Playing a gig, got seen by Matthew of Trivium and so became a very popular fan and friend helping you getting signed and then playing a gig again and got a fan and friend in legendary Dave Mustaine. There´s just one thing left to say: You lucky bastards! J How do you feel about that? Can you realize yet, what happened to you? .

YES TOTALLY, IT IS PRETTY AWESOME. WE JUST GOT LUCKY, WE WORKED OUR ASSES OF FOR ALMOST 8 YEARS BEFORE WE GOT ANY SORT OF FOLLOWING AT ALL, SO IT ALL SEEMS WORTH, WE ARE LIVING THE DREAM NOW.

3. Road To Bloodshed is really one of my favourite records this year. You combine old-school thrash and melodic riffing with an aggressive voice still including harmonies, fastened drums, neck breaking moshparts, bouncing guitar soli and epic clean sang choruses that cause a heavyweight atmosphere. All this almost perfectly on your first record. 12 songs really thrilling without reducing speed! This is what other bands try for years without success. Did it happened on accident or do you follow a certain concept when you start writing your music?

FIRST THANKS FOR SAYING THAT, AND WHEN WE GO IN TO WRITE OUR SONGS WE NEVER THINK ABOUT ANY OF THAT, IT IS A JOINT EFFORT FOR EVERYONE, WE ALL HAVE A SAY IN THE SONGS AND THAT IS JUST HOW WE WORK. I HOPE WE CAN CONTINUE TO DO SO.

4. How is the album title to be interpreted?

ANYWAY YOU WANT..NO ITS KIND OF AN EXTREME WAY TO SAY HOW WE CAME UP AND OUT OF LOCAL SCENES , AND THAT WE TRIED REALLY HARD TO KEEP IT GOING, IT WAS OUR ROAD TO BLOODSHED

5. How does the release affect your life? Are you willing to throw everything else overboard to get on tour and live a life on the road?

WELL IT IS A SENSE OF RELEIF ACTUALLY IT TOOK A LONG TIME, SO IT FEELS GOOD TO HAVE SOMETHING WE WORKED SO HARD FOR INTO PEOPLES HANDS.

6. Jared has a very intense style of singing. Do you think his voice is going to survive a weeks-long tour? Any secret hints you could tell every motivated amateur singer out there? 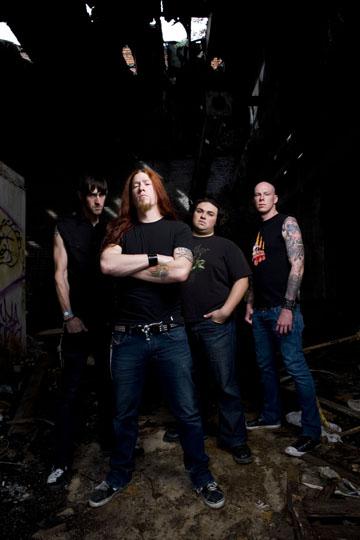 WELL CANT SAY FOR JARED HAHHA, BUT HE DOES WARM UPS EVERYDAY AND WHEN HE STARTED DOING THAT WE COULD HEAR A VAST IMPROVEMENT IN HIS SINGING.

7. Metalcore is definitely media´s most favourite hype at the moment and specially bands such as Bullet For My Valentine, Trivium and Mendeed are very popular and ´though talented as well they are all targets of critics who yell boygroups of metal, sell-out products and wannabes benefited by trend  aren´t you afraid of getting abused in the same way?

WELL WE ARE NOT A METAL CORE BAND, WE DONT HAVE BREAKDOWNS! PEOPLE CAN COIN US INTO ANY PHRASE THEY WANT, BUT WHEN THE END OF THE DAY COMES WE ARE HAPPY WITH OUR SONGS, AND IM SURE ALL THOSE OTHER METALCORE BANDS ARE AS WELL.

LOTS OF STUFF, WE ARE DOING A DIRECT SUPPORT SLOT FOR SYMPHONY X IN THE STATES, THEN WE DONT HAVE ANYTHING PLANNED AFTER MID AUGUST.


9. What has been your favourite record last year?

UMMMM SACREMENT FROM LAMB OF GOD, I LOVE THOSE GUYS