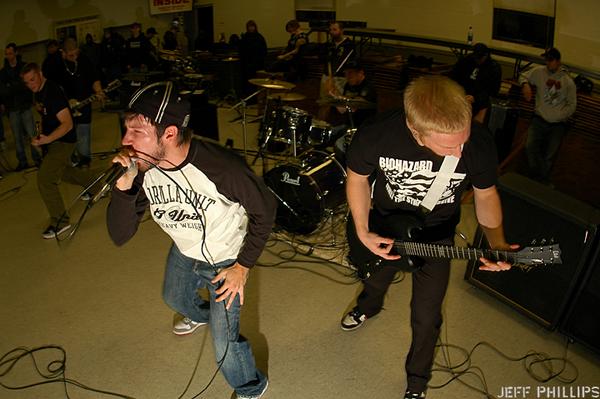 Hailing from Erie, PA, Stand Firm is a political hardcore band who believes in revolution and doesn’t back down. Their current lineup is Shane Young – Drums, Greg Waldron – Bass, Aaron Martyr – Vocals, Black Matt – Guitar, Bryan Elchynski – Guitar. With musical influences such as All Out War, Subzero, Death Threat, No Retreat, Merauder, Fury of Five, their sound is tight and strong. Their music can be heard at http://www.myspace.com/xstandfirmx .
Roya Butler got a chance to sit down with singer Aaron Martyr and chat about politics, the straight-edge ideology, and what Stand Firm is doing to make a difference.

How long have you been playing?

Aaron Martyr: The band has been together since fall of 2004, but I joined the band more recently in winter / spring of 2006.

How did you start out?

Aaron Martyr: It started out as something small and fun for a few kids to do from time to time, while spreading the message of straight edge. In time, as this nation and the world has been changing, the band realized there's more issues out there to bring to light. We've had a few line-up changes, but what we have now is pretty solid and I'm looking forward to the sound to come.

How do you find the hardcore scene in Erie, and PA in general?

Aaron Martyr: As with every scene, it has its ups and downs. We'll have our shows that are packed out, with no room to move, and we'll have our shows that will be 20 close friends getting down to the locals and smaller touring bands. I gotta say though, I've been a lot of places, I have even moved away for a time... No hardcore scene feels more like family than Erie--Just something about it. PA as a whole, honestly has great hardcore bands, great times. Everyone respects each other, everyone has a blast.

Being a straight-edge band how does that carry into your songs?

Aaron Martyr: We believe that a big part of bettering society as a whole starts with you. Keeping a clean body and mind can only strengthen your will in the long-run. We hope that in time, by keeping people aware of their responsibility to themselves and to those around them, we won’t have problems with substance abuse the way we do today.

Your lyrics seem deeply political; tell us about your stance.

Aaron Martyr: The 5 of us vary in our own personal political stances, but we all do agree that our basic freedoms and constitutional rights are slowly being infringed upon. Regardless of which "political party" you represent, Every civilian has the right and duty to stand up for what is best for the home in which they live.

Tell us a little about what your song ‘Justice Prevails’ means to you?

Aaron Martyr: This song is a spotlight for hypocrites around the world. Don't get me wrong, we all have our faults... But this song, primarily, deals with Religious hypocrisy. I can't think of a country in the world today that hasn't had to deal with it in one form or another. People preach one thing and do the other. The specific example in Justice Prevails deals with homosexuality, and the Christian church. It talks about how the church preaches a message of acceptance and loving the sinner, hating the sin... Yet more often than not are the same people who cast out and hate upon homosexuals rather than loving them as they instruct to do. It speaks of the absolute justice that I hope awaits these judgmental individuals someday, whatever that may be. 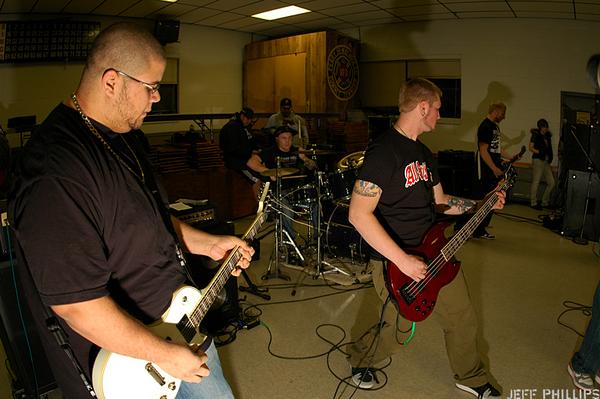 What's your song ‘No Right to Breathe' about?

Aaron Martyr: No Right to Breathe is specifically about rape and domestic abuse. We show no mercy for someone who would commit such heinous acts. In the description beneath our lyrics I speak of certain actions that can lead up to rape and abuse, primarily society's naivety in the area of objectification of women. People see it all as commonplace and forget to see what is really taking place. Our ignorance and apathy only feeds the problem.

Can you tell your fans a little more about what it means to you to be a Pennsylvania Hardcore band?

Aaron Martyr: As I mentioned before, there's just something about it here. We're very proud of where we live. PA has a long history if great hardcore bands that have made huge contributions to the scene in this area. PA is definitely distinguished in the states. We love this area and everything it represents. We're just happy to be a part of it.

I know you’ve just started out, but what venues have you played so far, and which one is your favorite to play?

Aaron Martyr: Well, due to work and school, we've not really played out all that much. The majority of our shows, of course, are local, but we have played a couple shows through New York State, as well as in Ohio. We hope this summer will be a chance to spread our message a bit further, primarily to the East Coast and Midwest areas of the states, and in time the whole country, and eventually Europe.

What's your favorite part of playing on stage?

Aaron Martyr: The raw energy. I love the sound and feelings we put forth when we're up there putting our hearts into it and just getting down to the music. There is so much passion up there, it feels incredible. Especially when I see the kids in the crowd take part in singing along and getting into it, I feel like I'm sharing some of my best qualities with them, and honestly... it's magical.

Aaron Martyr: Thank you very much for expressing an interest in us and I truly hope that someday we can get out to all of our fans. And to all of you reading this, be proud of who you are and where you're from. Be proud of your home and your beliefs. Love your home, Love your family, and Love yourself... With that, nothing can tear you down.