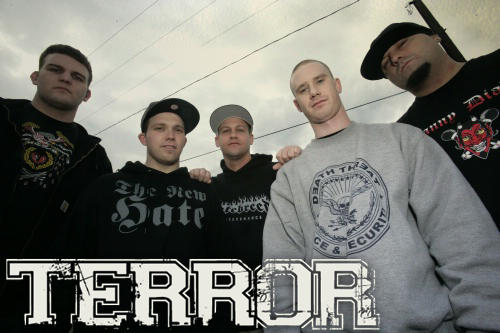 Q: How is The Sounds of The Underground Tour so far?

D: It has been great so far, a whole lot of people coming to the shows, and great bands to play with.

Q: The lineup is pretty dense so, and you dont have much time to play a lot of songs, at least, thats the way it was in Herford yesterday

D: Theres days when we arrive pretty early and stuff, and then the bands can actually play longer. But that is what happens when you go on big tours with so many bands: you really cant see the band you wanna see much longer! I can see the fans want to see their favorite band longer, so they should start earlier so they can play longer, but to me, I dont mind. I play the songs every day!

Q: How is working with King Zeuss? How are his influences on your sound?

D: We have been a fan of his work now for a while with Hatebreed, and Shadows Fall and stuff, so it was pretty cool to finally get to work with him. He made the record sound great. I think it is definetely the tightest-sounding recording we have gotten ever. I think finally, even with the last record we have put out Lowest of the Low, the records have not done the songs justice in sound. They now sound so much better on the new record, but I think with this record is actually that people will hear that the songs finally sound like they are supposed to sound.

Q: Will you be making up to your nickname as roaddogs again this year?

D: Definetely! We wanna play as many shows this year as we can! This is pretty much the first tour we are doing this year, but it will go on pretty much until October or the end of the year. I like playing every day, but sometimes there are just days where it is mostly hanging around, waiting to go on stage which sucks sometimes. But the shows are always fun.

Q: Nowadays Terror has become one of THE names for oldschool hardcore. What does that mean to you keeping up the spirit of such bands as Agnostic Front, Sick Of It All or Cro-Mags?

D: Yeah, I think with us finishing the new record and stuff, we are getting bigger or better known, and we have become a better band and this right now is the strongest the band has ever been.

Q: Do you think there is something special about Californian HC? I have seen some concerts at The Pound SF, and it seems to be a different thing from concerts soemwhere els or even in Europe. Do you see a difference?

D: I did not notice that much of a difference, I think the scene is pretty much as big as it is over here. Youve got the fashion-core shit here as well as over in California. To me that doesnt have anything to do with Hardcore. Fashion and Hardcore really dont have anything to do with each other. I mean, if you wanna look like that, then go ahead, but thats not hardcore.

Q: Do you see a difference in the crowd from the past to now?

Q: How much have you as a band evolved and grown together especially since all the imense touring you have done?

D: When I joined the band, I didnt know anyone in the band really. So, they were all strangers to me, and now we are all really close friends. We always have so much fun. It is like a big family thing, especially being on tour together. When were not on tour, though, we dont pretty much see each other because I live in San Francisco and the others live in L.A.. But we tour so much, that we dont really need to practice really much, and there is never a long time that we dont see each other. But it is not on a daily basis inspite of touring. We kinda just meet up for the tours.

Q: How has being in Terror changed your life?

D: Well, I quit my job, and THIS is pretty much my job now. It changed the whole world for me pretty much. If I wouldnt have been in Terror, I would not have done any of that music thing. And I get to meet a lot of cool people all around the world, so it is cool. I would not change anything if I would have the possibility to do so. This here is pretty much what I always wanted to do.

Q: How did the change from Bridge 9 to Trustkill Records take place?

D: Well, Trustkill is a much bigger label than Bridge 9 was, so we were all the more accessible for people who wanted to buy our records because this way with Trustkill you can buy them pretty much everywhere. And they got videos for us, and press and magazine stuff which Bridge 9 never was able to do. So it was a pretty big jump, and they pretty much put us out there.

Q: How is it with the other bands on Trustkill? Do you have a lot of contact.

D: No, not really. Its not that much of a family thing being labelmates. We go on tour with some of the bands some times, but I must admit that I didnt know a lot of the bands on Trustkill beforehand.

Q: Where do you see Terror next year or in two years? What does the future hold for the band?

D: I really dont know. I mean were going to keep on going as long as were having fun and as long as people wanna hear us.