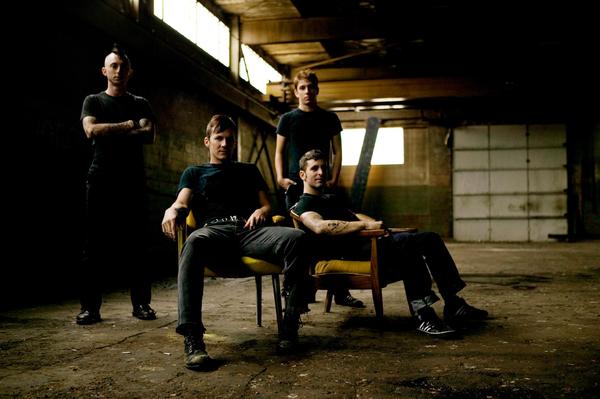 How did you guys start out?

Billy: In 1998 Michael and I started out. We met though a mutual friend and started playing together. That was the early formation. The band we started originally, I wasnt singer. I was playing guitar. We had a different singer and bass player and drummer. Eventually I started singing, and one thing let to another. So, the last couple years its been the four of us with Bo and Angelo, me and Michael. But thats basically how it started with Michael and me meeting though a mutual friend and just gradually finding our sound and finding the right people.

How would you describe your sound?

Billy: Well, we try not to label our selves as a certain sound. We listen to all kinds of music. Old rock and roll. The whole spectrum of rock and roll, great bands that have influenced us over the years. And I think its easy to just call us a punk band because we play songs that are faster and somewhat aggressive, but really we just try to play songs that we like. We try to write the best songs that we can. We dont try to write a certain genre, or a certain band. We just really try, and I know were not reinventing the wheel, but we just try to do our own thing. Everybody borrows from influences from other bands, but we really try our hardest to just be our own sound. Which is sometimes harder. If you fit a certain style of music. Easier road. If you sound like a band that is already big, its a hell of a lot easier to create fan base or tour.

Michael: (laughs) So to answer the question: Greenday.

Billy: No, everyone has a different opinion, which is what we like. And well read a review on our album and one person will say that we sound like pistols, Ramones, and Black Flag. Then well read another and itll list totally different bands. I guess theres just a little bit of everything in there. Its up-tempo and melodic. We definitely try to make a chorus that you can sing along to.

Tell us about your new album.

Its called A Beat Missing or a Silence Added. Kind of a long title, but whatever, we liked it. Its on Blackheart Records. Its produced by Joan Jett and Kenny Laguna. Kenny Laguna is Joan Jetts long time producer/manager. He also runs Blackheart records and plays in the blackhearts. So they produced it. Fifteen songs and it was actually and album that we worked on for a few years. Our first record was on a smaller more independent label. It was like in 2002. So we had two or three years of just writing and lots of time to find the right label to put the record out.

Michael: And we had no money. So we just kept practicing and doing local shows. Thats when we did a show with Joan Jett and she asked after the show if she could put our next record out. And we were like, yess! No questions asked. So that was it. We didnt worry about contracts. It was all handshake deals. We just wanted to hang out with Joan Jett.

Michael: It was pretty nerve racking. When you first meet her you have this idea of what shes like. You know, rock star legendary and famous. And then when you meet shes such a cool person. No ego. And shes like a buddy now. Shell call you up on the phone just to see how youre doing. She just wants us to have fun. I said to her one day, This records probably not going to sell anything. I feel bad that youre paying for us to do this. And she said, I dont care. I just like you guys and want to see you get your name out there. So it was cool like that.

When you made it, was it a pop, or was it gradual and a lot of work.

Billy: We had struggled for a long time. We had all been in bands before the Vacancies. Officially I think that we were the Vacancies in 2000. So we had been doing it for so long. But definitely when we hooked up with Blackhearts things got a lot better. They did a lot for us. With a couple of movies, and that failure to launch song coming out. We never dreamt that we would have a song in a movie let alone a sound track. Weve been able to do some cool things and tour but it doesnt feel like weve arrived yet. Were still at a stage in our career where were just trying to get our sound out there.

Michael: We really feel lucky that all these things our happening to us. Were really thankful. We would all do this whether anything happened or not. There hasnt been a moment where were like, finally we have arrived! (laughs). We all go home and we all work jobs. We dont make money doing this. The moment when I will feel like I have arrived is when I dont have to go and punch a clock when I go home. So I would say that I think that were still struggling towards that.

Billy: But a lot of cool things have happened in the past year and a half. With college radio and just being able to be out on the road. Things are definitely looking up. But well just ride the wave until whatever.

Michael: We all live right outside of Cleveland. Angelo lives in Cleveland. So thats basically our home base, Cleveland Ohio.

Billy: Well, we started writing right away, even before A Beat Missing came out. So we went in the studio and laid down a bunch of drum tracks and had a bunch of rhythm guitar stuff that we had done already. So a good chunk of its done, but we had to put a stop to it to come out on the road for five weeks. So as soon as we get back from this were going to try and bust ass to get it done. Were saying maybe a fall release. So if thats possible thatd be really cool. Were really excited. Were really happy with the material. We think that its going to be a strong album and are just really excited to get it out there.

What inspired your new album?

Billy: Weve pushed ourselves with song writing. The sound is the same, but were definitely writing better songs. But as far as influences, its the same. Not a whole lots changed in the world since we were writing the last record, sadly. Were still pissed off at shit (laughs). Same kind of topics.

Would you qualify it as an extension of your previous work?

Billy: It has a different vibe. Its hard to say. Were still writing and not sure what will end up on that record. But we have enough right now to put out a pretty solid album that wed be proud of. As far as still be frustrated and just wanting people to get along its the same. But we touch some different topics. But still the same watching the news and getting mad.

Is there anything else you want to add?