31.10.2006
Who is today responsible for answering my questions? A short Introduction
please! 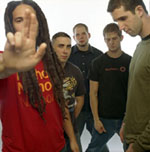 My name is Andy Corpus. I play guitar in the band Twelve Tribes. I am one of two original members in the band, the other being our singer Adam Jackson. And . . . Ill be answering some questions.

Tell me in some sentences something about your new record Midwest Panic!

Well, our new record Midwest Pandemic should be out by the time you read this. Its our second release on Ferret Records and were really proud of it. Its actually the first Ferret Release in Europe for us because Roadrunner Records handled distribution of The Rebirth Of Tragedy.

What are you dealing lyrically with?

The lyrics on this record deal with topics ranging from the political climate in the United States, to relationships, to death, boredom, and more.

How did you get the idea to create the song The Recovery : In three parts it sounds a bit progressive and epic!

It was an idea that was had discussed from the beginning of the writing process. A Lot of those riffs were actually left over from The Rebirth of Tragedy record. It just so happened that it came together in that way, but we like long epic songs, Were fans of bands like Neurosis and Cult pf Luna and stuff like that, not saying that song sounds like that, but we wanted to put our twist on a long, slower, epic song.

How has been the response so far on your record  Midwest Panic?

So far, judging from our myspace and message boards and whatnot, the response has been pretty good. The cd just came out this week in the US, but so far the response and reviews have been extremely positve.

What do you think about the term New wave of American Heavy Metal? A lot of people say that Unearth, Killswitch Engage and you are part of it! So you think its stupid or right to use this term?

I wouldnt consider our selves part of that. I think weve benefited greatly from the success of those bands, and they are our friends, of ours, but I see us in a different category, I dont think its a stupid term. These bands are having a big impact on metal and the mainstreams perception of metal here and overseas.

What do you think about Metalcore? You think that you are a so called Metalcore band?

I wouldnt call us a metalcore band. We dont use the Swedish riffs and constant breakdowns I associate with metalcore.

What are you doing beside Twelve Tribes? What are your other projects or regular jobs?

Well, this past year we took off to write. Unfortunatley writing doesnt always pay the bills. We all work jobs. Adam is a mechanical engineer. Our drummer Shane and I worked as techs for some bands this past autumn. Shane worked for Every Time I Die and High on Fire, and then both of us worked for Bullet For My Valentine for a month. Other then that we all work shit jobs, landscaping stuff, factory jobs etc. We prefer tour to say the least. Its going to be great to get back on the road.

How do you feel about Europe?

We LOVE Europe. The best tours weve ever done have taken place on European soil. The country is beautiful, the fans are amazing, the venues treat us great. We cant wait to get back over there in November.

What do you expect about your upcoming tour with Hatebreed and Unearth? What do you think about these two other bands?

Were all beyond exited to be a part of this tour. Hatebreed has such an amazing following and their a band we have a lot of respect for seeing as they have pretty much paved the way for 90% of American hardcore, metal, metalcore bands today. Their hard work and success has opened up a lot of opportunities for bands like us who were playing basements and small clubs 10 years ago. The guys in Unearth are really old friends of ours and we have always stayed in touch. They have been very supportive for a long time and were exited to be able to share the stage, as well as a bus with them. That tour should be great.

What else will the future bring for you?

Were going to do a short headlining tour in the States when we return home in Dec. Then theres talk of doing some US dates with our good friends in 36 Crazyfists, but well see. Nothing is set in stone as of yet. 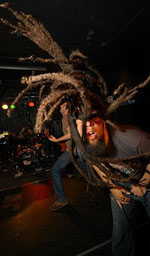 Okay now I will ask you for some words/Persons and you can tell me your opinion on it:

Great band, were all fans. Id probably never pop in a Slayer cd again in my life. Theres no reason too. Their records are permanently engrained in my DNA since highschool, haha. I could hum every riff of 3 or 4 of their records you know?

This will bum a lot of people out, but Im not a fan, never was, I would even have trouble naming songs or albums. They were just a little before my time, and kinda cheesey to me now.

Nu Metal is dead. I never got into it. We were all little Earth Crisis / Strife kids when that garbage was getting big. I was kind of intrigued at times that dudes were screaming on the radio, but it was watered down and Im glad to see it go.

A few of us were big into the straightedge scene. I actually have a huge straightedge tattoo on my stomach even though I havent been sxe since I was 20 years old. Our singer Adam is straightedge and has never never been drunk or done drugs in his life. If it works for you thats great. I dont have anymore respect for straightedge people than I do for people who drink or get high, but I respect their choice. Some of my all time favorite bands such as Earth Crisis and One King Down are straightedge.

Major Labels can be a great thing for the right band and a disaster for the wrong band.

Andreas is a cool guy and smokes tons of weed and has a really nice apartment. We had a lot of fun working with him and Id recommend any band to work with him. We wasnt so much a producer as he was an engineer. He didnt change any of our music or anything. What we had going into the studio was what we recorded.

Do you have any last Statements?

Thanks to anyone who took the time to write this and we hope to see you guys on tour this upcoming year. Check out the new cd, too.