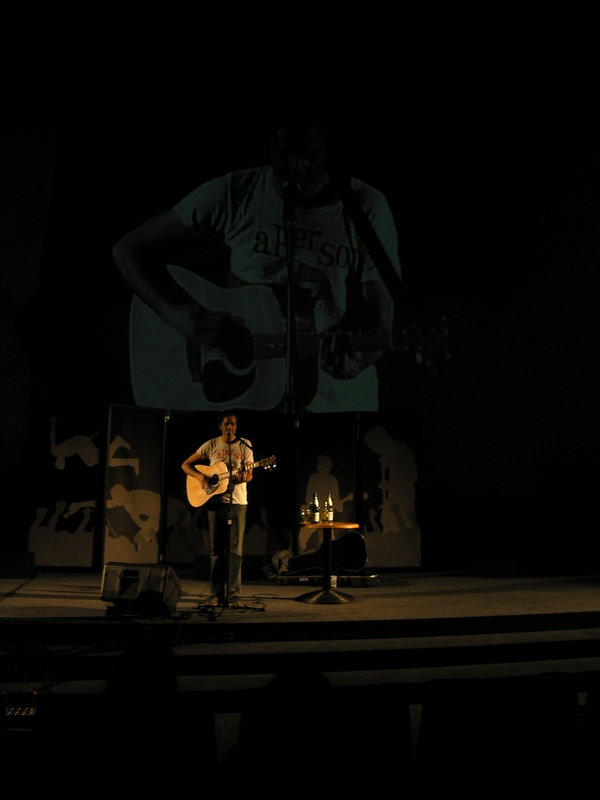 Hello, its really a great pleasure for me to have some time to ask you some questions.

First of all, you havent seen the movie (American Hardcore) yet, so why do you play here in Muenster right before the preview?

Hm Peter and the people who put this up this thing tonight, thought it would be a good idea that I come and play a short set because I live in Berlin and because of my evolvement in Hardcore and hm so it sounded like a great idea!

Oh, you live in Berlin?

Oh, now Im surprised. I knew that your grandfather is of german heritage but I didnt know that you moved to Germany. So, how did this come up to your mind?

Yeah, my grandfather is German but I just moved there because I love Berlin and to have a little adventure in Europe.

And how do you feel Berlin? Where do you see the differences between both music scenes?

First of All, Im not so involved in the hardcore scene but I have good friends who are involved into it but the music scene is great. I mean there are lots of cool people coming together there, and there are lots of great shows every weekend and many of my friends come to Berlin. So I see tons of friends who play in bands in America showing up in Berlin. Its not like I would rather see them in New York or in Berlin, its just nice and its good for me to play music there because I know less people in a way. So, its more like I have more time for myself. 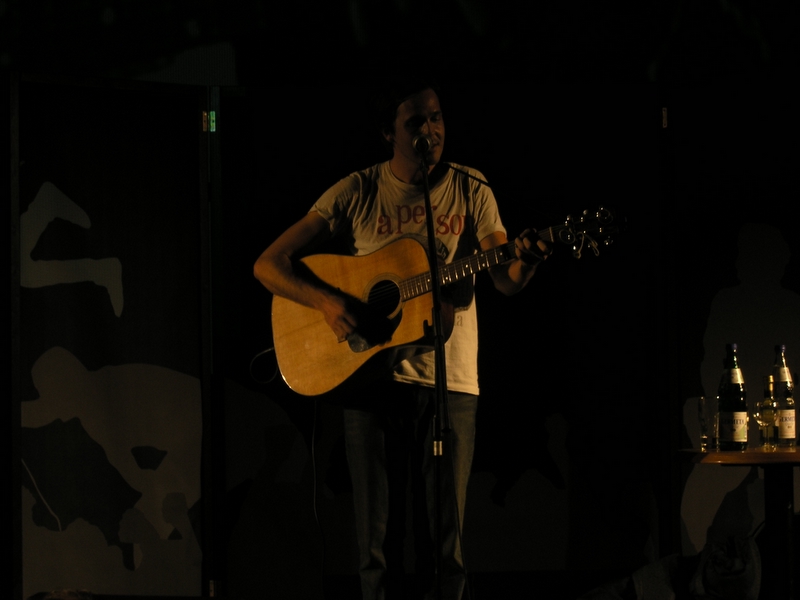 You get different inspirations for your songs and music?

Do you see a difference when you write a song for Rival Schools or Walking Concerts?

I guess right now Im writing Im not thinking so much about what its for. But I think there are songs that maybe could be used for more than just one band. I usually could arrange a song, if I speed it up a bit, as a Gorilla Biscuits Song or it also could be a Quicksand song and you know, if I want to make it a little bit slower and more poppier song it can turn into a Walking Concert song. Its coming from the places, I just write about what Im thinking.

Okay, now I will ask the most obvious question. Will we ever see the Gorilla Biscuits again in Germany?

Its possible I mean the point is that it took us a long time to get a show together because we are all into doing different things and we wanted to prove that it is a good idea. And, you know, we did the CBGBs-Show and this was very successful and we really enjoyed it!

Ive seen the show on YouTube and I thought that had to be a blast!

Yeah, even on this crappy YouTube-Movie you could see what was happening there and how the people reacted. It was a pretty amazing experience and I think we were all like Wow, is this really happening? So, after that reunion show we did a 29 days Tour through the USA and I was like I hope this goes well because at CBGBs it was only one show and this time we were on the road again. But in the end it was really great. I mean it was really awesome. We had a wonderful time so we said its possible, maybe, to do something in Europe in the future, but there are no plans at the moment. I hope so because I would be into it.

Are you sometimes surprised that you had such an impact on the whole Hardcore scene with the GB? Until today people and bands are listening to your music and even cover your songs, like Fall Out Boy for example (Start Today) and they have nearly nothing to do with hardcore music!

I think that the record (Start Today) is good and I think it came out at the right place at the right time and I think that it is musically not just hardcore. There are many records which influenced me and I was really into them when I was into hardcore but there are only a few that I still listen to until today. But, like I said before, there are these kinds of records which sound musically really good, like Minor Threat for example. I dont listen to it the whole time because its pretty aggressive but I think its just good music and I think thats the reason why people still get into Gorilla Biscuits and why they still feel related to it because they think the music is good and the lyrics are good.

So, where do you see the change of the Hardcore scene in the last, nearly 20 years?

I think its to me the idea of the Hardcore scene is lost. Maybe I have limited idea what hardcore is about but its not like once something becomes big, Im not that interested in it anymore. But I dont think that this is a reason for people to think that Hardcore isnt anymore interesting. For me it was exciting that there were only a few people making records because it seemed to be impossible to do it and nowadays its really easy to do a record and everybody can do it. The whole community spread and people used to make their own T-Shirts and now its like there is more understanding in what to do and I think even the scene between 1980 and 1988 changed really radical because bands like Minor Threat did not have the same chances as we did have them in late eighties. I mean for me Hardcore is something cool that is still worth to getting into it. For me its just too much Metal in Hardcore.

This is no Hardcore. Hardcore is for kids that have fucked up families, fucked up houses maybe its also for intelligent people, too. And I like to think of it as a leftwing community and I think Metal ist just Metal. I hated Metal than and I dont like it now.

What do you think about Emo? Comparing early bands with newer bands like Taking Back Sunday; do you think that nowadays Emo has something to do with older bands of this genre?

I dont think it is the same. I think its away from the people to talk about it and its more produced to be sold. Its nowadays usual that people want to sell as much records as they can. Its like Oh look I found another great Emo band And

Isnt it the same with Hardcore Bands?

Yeah, absolutely! But for me, when I was involved in the Hardcore scene it seemed to be a lot of diversity but people were together. Nowadays hardcore is completely violent and its all about selling records. The people dont work together in the sense that they live this diversity. On the one hand you have the left-wing and on the other hand you have the punk. Hardcore does not have the community anymore But Im just talking shit because Im not that involved anymore in hardcore.

Yeah and you could go even more far: Look at the people at major labels and record companies, who really got into that kind of music. They are like Yeah there is this new band from Muenster and they are Hardcore and you are going to love them! And, you know, the record executives know exactly what they talk about.

What do you think about the slogan Hardcore is more than music? You think there is still political awareness in the Hardcore scene?

I couldnt comment on this question because Im not that into Hardcore anymore. But Im sure that there is still some kind of political awareness and I would imagine yes and if you are into it I couldnt imagine that you are all alone, you know? There are always people who pay some attention to politics and stuff. But I think there is more than this, you know? You can make your songs only about politics and call it hardcore and you could make your songs only dealing about violence and then call it Hardcore. 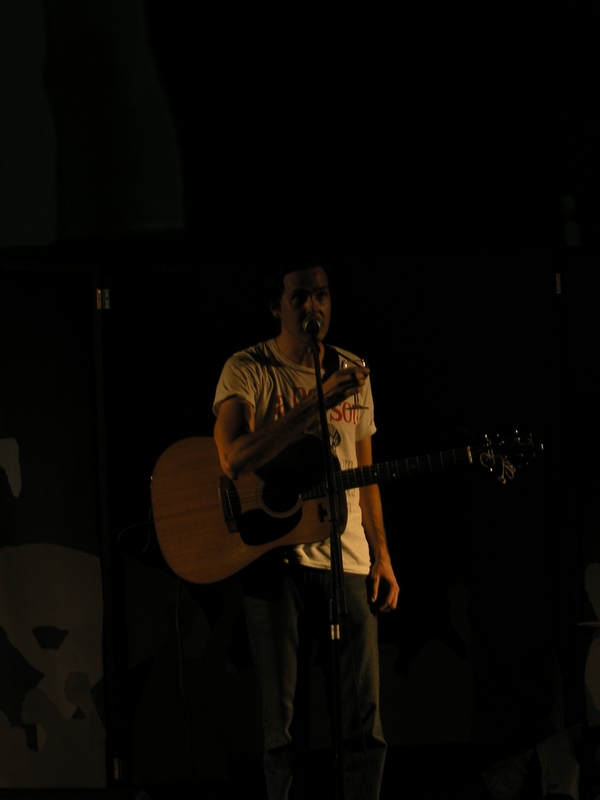 Hm okay, so where did you find your connection to Rock/Pop-music? Which bands had an influence on you?

I always was into it. The first bands I was into werent Negative Approach and Minor Threat. The first bands I was into were the Beatles and you know I was into like British punk, like Joy Division and into Buzzcocks and late seventies Punk. At the beginning I was really more into poppier bands before I found Hardcore, like The Clash. And I think when I got into Hardcore I again was more into punk-related bands like the Descendents or Cirkle Jerks. When I started to do Hardcore music I brought that into GB, too. If you listen to GB it has Pop in it. Maybe you dont realize it. But there are big choruses and its fast and surely its related to pop. Maybe there is enough uglyness to it that it seems to have kind of something dangerous that isnt in Pop music. Anyways, the short answer is that I was always into Pop and I added this to all the bands I played in, like Quicksand, Rival Schools or even the GB.

Okay, what do you think in general about this whole Reunion Shows of bands like Bad Brains or Cromags and so on? Do you think you are a kind of trendsetter?

I dont think that Im a trendsetter I think that it is a natural thing right now and it happens. I think it is because there is a group of bands everybody wants to see. I think the internet plays an important role in this because you can get all types of music really fast and even if a band is totally unknown and produced a demo 1992 the people can contact them and create a demand for their music and I think this is a quite important fact. When I think now of Hardcore and the bands you have mentioned you have to realize that these bands didnt really get to do much, even if their influence has continued all over the world because of the original Hardcore.

Thats it! I have two questions left! First is dealing with you future plans: So will you release some records in the next time?

Yeah, Im working on a new record in Berlin. It will be a Solo-Record and with some german people I will do more projects and mor things under my own name Im actually thinking of doing a Rival Schools Record next year and so I have a lot of music and Im looking to get it out.

Okay last question is more a statement which I would like to have comment by you: "So when whatever you are doing happens to have enough success to actually be seen by more than just others in your circle, your first indication is to abandon it and move onto something more underground again. ... The official term for this is 'Walter Schreifels Syndrome."

(laughs) I dont know what I should think about this statement. I dont think that this is a good thing. Im sure I dont think of this in that kind of way but I guess Im not comfortable with the idea of being only in thing involved. On the one side it would be really nice to be famous and have a lots of money, but I dont want to get sell-out and Im not into that. But maybe I should try it and get to the next level of the Walter Schreifels Syndrome". (laughs)