26.05.2021
Hey! How long have you been making music in Russia and how have things developed since then?

This year 2021 is our 30-th anniversary as a band. I'd say the whole entire punk-rock scene in USSR/Russia has developed with us as participants and witnesses.
From local underground illegal shows to the days when we have bands that can sell thousands tickets, from DIY releases on cassettes to itunes/spotify top-charts, from fights with nazis on DIY festivals to MTV.
We were growing and changing as a band, but actually never betrayed our ideas.
At the moment, we're probably one of the biggest bands in this genre, and band's name well known among people who are into this kind of music in Russia, CIS, Israel.

You are a big name in your home country. Do you play only in the big cities there or can you fill big halls all over the country?
To be a big punk band with a long history in Russia is not the same then being Die Toten Hosen in Germany or The Offspring in US,
Rock music in general and punk as a part of it never was a big deal here.
Besides, punk-rock is fulfilled with ideas that are not common for a lot of people here in Russia.
That's why we only can play big venues like 3 - 5 thousands capacity only in the biggest cities such as Moscow, Saint-Petersburg, Kiyv or Minsk.
As for the rest of our usual tour dates, this are 300 - 1500 capacity.
Last year when pandemic paralyzed the whole concert business, we even managed to make a tour with shows in tiny little bars, just like we played in 90-s, before we get kind of big.

Have you often had problems with the government?
We had a few shows that were interrupted by the police, we also were in a government's Black List, as people who are not really welcomed in Belarussia.
Just because we signed a petition to support political prisoners. At couple of festivals we also had the electricity shut down by somebody who was not happy about things we say from stage in between songs.
There is a Radio station here in Russia, it's one the biggest in general and biggest in rock music for sure, they also have a festival, huge one. When we were playing this festival, we stood for out antimilitary ideas, having the words said, songs sung etc.
In the end they took all of our songs from this radio.
At the moment personally I'm being under pressure from authorities because of the video I did supporting Alexey Navalny and declaring that he needs to be freed from jail. Police has started a case against me.

In Germany, Nawalny was big in the media. Do you have a point of view on this topic or are these issues too hot to discuss in public?
I believe it is totally fine to talk about it, and it is needed.
Despite of the video I mentioned, we're still standing on our ideas and talk about them out loud even if sometimes it might be dangerous.
I have a strong belief that authorities tried to poison Navalny because of the things he opened about them during his investigations, he plays a big role now.
And then after German doctors brought him back to life, he came back and was put to jail.
He is denied in justice, he is denied in opened and fair investigation, safety in prison and we stand against it.
You are on the road a lot in Germany, you played shows with ZSK and Rantanplan, among others. What are your experiences with the audience in this country?
We really love to play in Germany.
First of all audience in your country has a very good understanding of what we're doing and saying even if sometimes they do not undestand the lyrics.
Second, punk music came to Germany a while ago, it's propably its third generation now, and it means you can see people in their 60-s coming to the shows.
It's incredible.
We were huge fans of Nina Hagen, Die Arzte, Die Toten Hosen, Die Goldened Zitronen from 90-s, and later became fans of Donots, ZSK, Wizo, Beatsteaks, Terrorgruppe, so when we're playing in Germany, we can feel the vide that inspired them.
Sometimes we even cover some of those bands, what makes boys and girls at shows go crazy.
I think people in Germany as well as Russian are quite good in drinking :)
We love German beer, language. Two of us actually were studying German in schools.
So we feel great whenever we're visiting Germany.
You also play a lot of songs with guests and have recorded songs with members of Millencolin, Anti-Flag, Die Ärzte or Useless ID, among others. You also released your last album on Anti-Flag's label. How do all these great contacts come about?
Usually before writing or recording songs with somebody, we know them in person.
Sometimes we write songs and you just know for sure it's a certain singer's voice supposed to be there.
There are also situations when we just love the band and they like the song.
And sometimes (for example "Killing Pigs" from The Power of One") it is just much stronger when you have lots of amazing guys supporting the idea.
As for Die Ärzte, than went quite funny. I met Rod in Moscow when promoter of their only show in Russia invited me to a pre-party.
We've hung out  all night, had a lot of vodka with lemons, and next day I realized I lost my entire Die Arzte vinyl collection that I brought to the party to get autographs.
When Rod heard about that, he asked me if I want him to send me over from Germany the same records. I only asked for his e-mail.
And five years later, in 2012 he helped us with the song called Schlechte Tanzer.

Your new EP will be released on Funk Turry Funk in Europe and Say-10 in the USA. What can we expect from it?
These are 6 songs - english versions of the songs we put out in Russia on LP lately, we picked them with our label. Just released, the newest songs. In other words they represent what the band is right now. Songs are great, we love them!

What else do you have in the pipeline?
Oh, we have a lot ideas. The second part of Russian Album just came out. We have split with Itchy coming next year. We have an idea about split cassette with DFL (great US band). There is huge Russian tour coming to celebrate our 30-th anniversary. And for sure we're planning some shows in Germany as soon as the borders are open!

What is your guess: Will you play in Russia again first or in Germany?
In this circumstances it will be Russia. Shows are booked. So if we're not blacklisted by our "great" president Mr. Putin we're going on Russian tour this fall.
Hopefully soon we will be able to travel again. Do you have a place in Russia that should be visited?
If you're tourist from abroad and it's your first time to Russia, I'd say you should stay for 5 days in Moscow, 5 days in Saint-Petersburg, 2 days in old town of Novgorod or Smolenks on Belarussia's border and 2 days in town of Yaroslavl.
That is to be said about European part of Russia.
Personally, I really miss being on Far East - Vladivostok, Khabarovsk etc.
And Baikal Lake for sure. 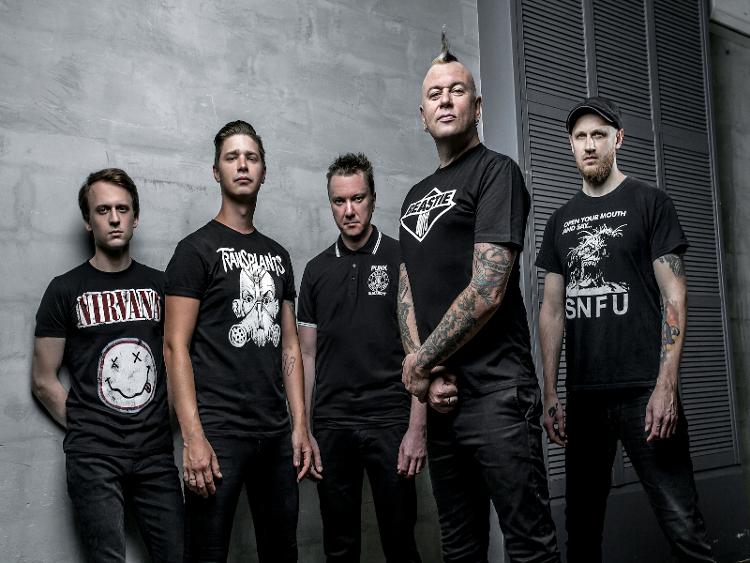