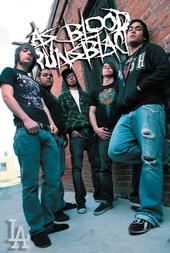 "So most of you are wondering what is going on with As Blood Runs Black. Unfortunately, we had a series of situations that occurred resulting in the letting go of a certain band member. There is by far no 'glitz' and no 'glamour' involved in this band. Any fan/friend who has come out to a show knows this for a fact. You all know how much of a humble band we are and how appreciative we are to have all of you as fans and friends. The Lech that fans know and the Lech that we as a band know are two completely different people. There were endless amounts of problems regarding the way the band was being handled. On several accounts we, the band, were looked at as 'employees' and not as a band, as if this were a dictatorship. There was very little effort put into the 'grunt' work of the band and there were several personality conflicts, on numerous levels, creating unnecessary tension, angst, and stress within the band. We feel as a band that we handled the situation on a professional level and feel it's what's best for the future of As Blood Runs Black.

We would also like to take this time to pay respect to every single member who has ever played a part in As Blood Runs Black. If it weren't for them we wouldn't be able to be do what we are doing today. Specifically Bijon, Richard, Kyle, Ricky, Louie, and John. It was never our intention to leave you out of our thank you's or to give you credit for the roles you played in this band. We thank you for making the shoes for us to fill.

As far as the near future of this band goes, we're going to hop back on The Summer Slaughter Tour, started June 26th in Sauget, IL. When we get home we're going to finish writing and record our new album (yes, we're posting 1 to 2 pre-production tracks for you to spill your feedback and input within the first month of being back from this tour;]). Also, we know you guys are anxious about this new music video for 'The Brighter Side of Suffering,' and so are we! Just a few more weeks guys!

Thank you very much to all of our fans, fans who have become friends, and all our friends who have become family. We love you guys for the never-ending love and support. Lech, no matter what path you choose...we will still ALWAYS love you."