30.04.2020
Die Briten von BUSTER SHUFFLE kuendigen zwei neue Song im Rahmen einer "Unsung Heroes" 7 Inch an, die HIER in Vinylversion vorbestellt werden kann. Die Songs widmet die Skapunkband Ruby Bridges und Iqbal Masih - der komplette Erlös der Verkaeufe geht an die World Health Organisation (WHO).
Im Statement der Band heisst es:
"Hey People! We are pleased to announce we are putting out a Limited Edition 7 Inch AA Side Vinyl with all sales profits we make going to The World Health Organisation.
“Being on lockdown has made me think a lot. Both my sisters are NHS workers and on the front line endangering themselves daily. I’ve been unable to do anything other than stay home as advised. So now we’ve decided to do this...”- Jet Baker (Buster Shuffle)

The AA side 7 Inch single ‘Unsung Heroes’ consists of two songs inspired by two real heroes that we wanted to write about whilst on lockdown.

The more vinyl pre-orders we receive, the bigger our order will be - The costs of pressing will be lower and and more profit will go to our chosen charity the WHO (World Health Orgnization).
You can pre-order now exclusively from www.bustershufflemusic.com

“If we sell 300 then great, if we sell 1000 then even better as it’s more money for The World Health Organisation. It’s really down to the Ska Punk community on how much money we will raise. It’s a good, caring community so I’m hoping for a positive response”.

Both songs are about two brave people who, in their time, faced extreme danger and huge challenges to make changes in the world for others:

Ruby Bridges - At six years old became the first African American student to integrate into an elementary school in the South USA. Ruby and her mother were escorted by four federal marshals to the school every day that year. She walked past crowds screaming vicious slurs at her. Undeterred, she didn’t miss a single day of school despite all the abuse and physical threats she received.

Iqbal Masih was sold into slavery by his parents at 4 years old to the owner of a carpet factory. After many years of forced labour he eventually escaped. He then decided to help over 3,000 Pakistani children that were in ‘bonded labour’ to escape to freedom and made speeches about child slavery throughout the world. He was regularly threatened for speaking out but continued to give speeches regardless of the danger to himself. After receiving many awards for heroism Iqbal was murdered at just 12 years old." 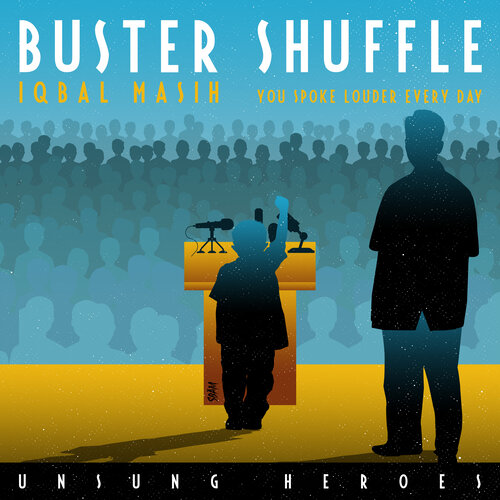