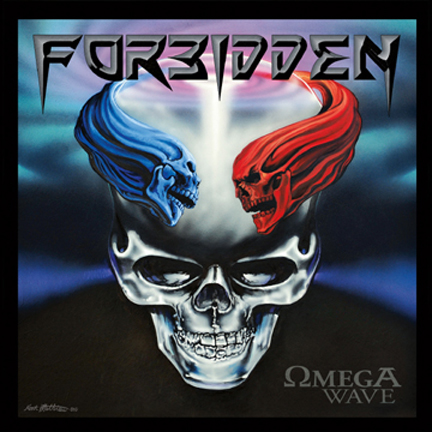 “As soon as FORBIDDEN committed to writing a new record, I wondered where Kent Mathieu was. I'd always felt like Forbidden Evil and Twisted Into Form were pretty iconic album covers… when things like that actually seemed to matter.

“Then, the good people at Nuclear Blast actually located Kent! I got pretty excited and reached out to him immediately. He was equally excited to hear from us, too. The only real direction I gave Kent was to somehow tie the past into the future. Find a way to make the two skulls [from Forbidden Evil’s artwork] vital again. He had worked up about 12 sketches all kinds of variously cool stuff. Out of all of the pictures he sent me, I liked the way one of them was laid out because of it's simplicity. After thinking about it for a long while, I had a concept for Kent to work with. The Omega Wave concept. The title wasn't decided until I had a good idea for the cover. “

“I don't want to over-explain the actual picture because there is enough symbolism for everyone to interpret everything differently. That is always a plus, in my book. What I can tell you is that the skull in the center is based upon the crystal skull of Belize. This skull was found at some of the pyramid ruins in two perfect pieces, jawbone and upper cranium. It was always quite a mystery, but some years later Hewlett Packard scientists did extensive tests on the skull and found many anomalies.

“One of them was that there is no way, even with our most modern technology, that we could cut into the crystal the way this skull was formed. It would shatter with any instrument we have available, even today. Another thing was the fact that no matter what temperature the skull was placed in, the skull's temperature would stay almost exactly the same. Scientists even believe the skull holds information that they could not tap into, like a giant computer chip with an impenetrable code.

“So I got to thinking: Does this skull - and the other ones found throughout the most ancient places on Earth - hold something that we would need to know to possibly save ourselves? This is not an entirely new concept, but it hit me pretty hard. What could we learn about ourselves that may save us at this all-important juncture for the human race?

“It seems as if we've reached our Omega stage as a civilization. Meaning, we as people seem to be in a hurry to reach some sort of ending… possibly all self-manifested by accepting some sort of pre-determined fate. Or possibly just pawns in a game that was played out before and will be repeated again and again in other times and dimensions. So Omega Wave is part science fact and part from my imagination.

“Kent Mathieu is a artistic genius who created something that respects this concept, as well as FORBIDDEN’s past, present and future! All of this with one very strong hand-painted picture. That's right, no computer manipulation whatsoever. Something else we can all be proud of! We hope you approve.”

ECOSTRIKE - A Truth We Still Believe

SKELETAL REMAINS - The Entombment Of Chaos

NECROPHOBIC - Dawn Of The Damned