"I just finished mixing this song. I wanted to post something before I left for tour with The Gimme Gimmes tomorrow. The song is called "This Is The Last Train". O.K., So... This version was originally a demo. I later recorded it with another band. The band has no name. Actually, the band has about 20 names. We just can't decide which one isn't bad. 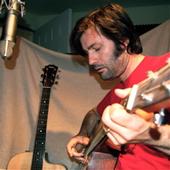 For now, I will refer to that band as "Dead Penguin", my favorite title in the running. Dead Penguin's version of the song is a rock version. I think it sounds like "Pinkerton" era Weezer. Anyway, I recorded an entire record with Dead Penguin in December 2006. That band is made up of 4 of my oldest friends and of course myself.

The full album should be complete by September. There is no label and no plans. I know what you're thinking. Isn't he in enough bands already? Yes I am. Dead Penguin was just a project purely for fun. I can't wait for people to hear that record. It's raw, unpolished and nothing like anything I've done."