Interview mit Arsonists Get All The Girls

First: Who is Arsonist Get All The Girls and who is answering my
questions? 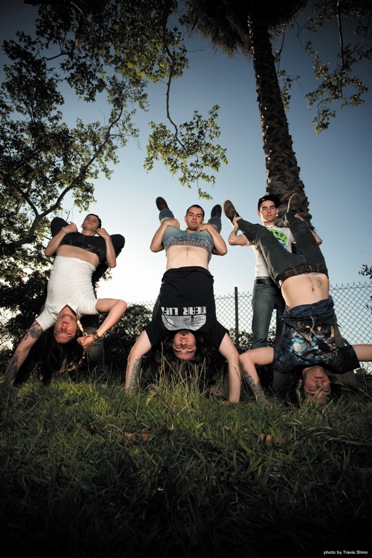 Arsonists Get All The Girls is: Arthur, Pat, Remi, Cameron, Garin and Nick Pat is answering your questions my friend.

Could you briefly tell the story so far of the Band?

We began as a joke jam keyboard band in our friend's garage about 3 years ago. Started playing local shows... and strangely we started gaining a bigger and bigger following. That made us decide to just start touring so we did one... then another... then another. Just played as many shows as we could get on and started to gain more and more of a fan base. We have now been on eight tours including our third full U.S. summer tour. We have definitely gone through some shit on the road but that shit happens and you've got good ass friends with you to make it fun.

You got various influences from many genres and you nearly combine
everyone of these influences. The result seems to be the total chaos. How do you write such songs and how to you keep them all in your mind? 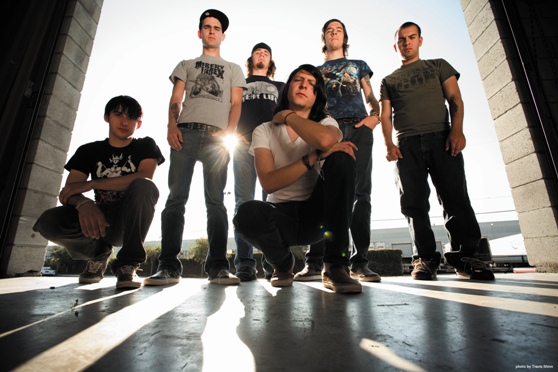 Arthur is the man behind what we write songs to or around. He comes up with some crazy ass shit that you don't expect to hear at all. Jammy and catchy, heavy and fast, slow and doomy... he throws all that on the table into every one of our songs. Combine that with the five other minds that add to and build song... that's how we doooo.

Is there a specific meaning behind your Album-title "The Game Of Life"?

It actually has to do with some good friends of ours and a drinking game that has lasted for a very long time and we are making it a revolution! There's also aspects in the songs that have to do with life; chillin... dieing... touring... blazing.

Extreme Music seems to become increasingly popular at the moment! How do
you explain that to you?

More and more kids are starting to embrace some awesome styles of music and wanting to jam it too. I'm seeing more and more thrash and metal. It's getting crazy with all these bands that we continue to play with and meet how many different sounds and cool ass shit you hear out of them. It's fun.

You have started as a young and ambitious band. Have you ever dreamed of
getting a worldwide Deal with such a label like Century Media?

Century Media definitely caught us by surprise. We had made out a decent size list of labels we wanted to send press packs too but CM was not one of them. One of them went to Guy at Black Market Activities he dug the CD and had THE LEGEND Steve Joh over at CM check it out and it went from there.
Century Media is a fucking AWESOME family to be a part of. We are way excited about our future with them. 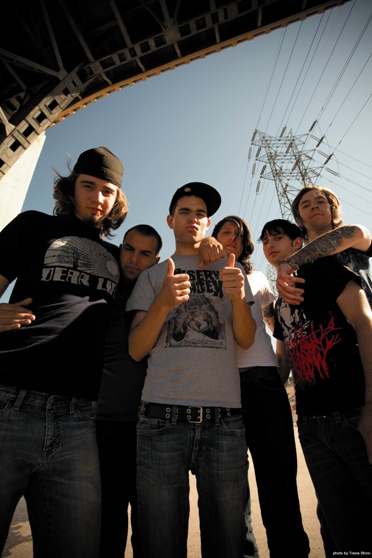 When someone would come up to you and say "You aren't making music you
are making only crappy noise!" - What would you reply?

Tell me about your first video fro the Song "Shoeshine For Neptune".

It was one of the funniest experiences of my life. Getting to just film a video with a bunch of friends was an experience in itself. There was actual latex masks and like a crazy ass set for part of the video. A lot of filming in public in these funny ass costumes. It's a children's story on acid basically.

Are there any plans for touring?

Yes, We actually have a run in October with Cattle Decapitation (Metal Blade), The Tony Danza Tap Dance Extravaganza (Black Market) and Vail of Maya (Sumerian Records) which brakes off in November to another tour with, With Blood Comes Cleansing (Victory Records) and Impending Doom (Facedown Records). We plan on continuing that with more full time touring... just looking for plans as of now.

Why do Arsonist get all the girls?

No clueee at all. To be honest I was very high on a few bong rips and came up with it in my room. Pretty ridiculous but rad.

The last Word is yours!

Smoke shit to get shit done.