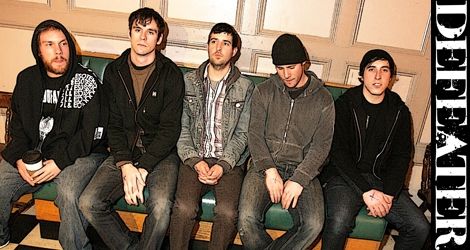 
Hi guys! Thanks for doing the interview with allschools.de...

Let `s assume for a moment that the lyrics on "Travels" would come without the music. Are there authors you would consider to have a similar voice? Would you say that there are some role models for your tone and mood of the poetic narration you created for "Travels"?


Jay: Derek loves Salinger, but when we wrote the lyrics it was just about trying to be as descriptive as we could. While I`m sure influence was drawn from different places none of it was directly intentional.

When and why did you decide to give the record an underlying, overall theme
as far as the lyrics are concerned?


Jay: It`s an idea I`ve wanted to try for a long time now, but I just never felt like I was in the right project to execute it. Once we realized Derek was more than likely going to be the voice of our band I pitched the outline of the idea to him. He really liked it and came back a two days later with three songs written.

Would you say that having a widely developed story helps to get a certain meaning across to your listeners?


Jay: I think when you set an actually scene for people it becomes easier for them to visualize the content of the lyrics.

Do you see the threat of being misunderstood by using such a highly poetic and (at least for non native speakers of english) more or less complicated story? Or do you think there is a creative potential for the listener if he or she does not always fully understand the meaning behind the lyrics?


Jay: There is a chance of that for sure but that`s a small risk to take when the other option is dumbing down the vision you set out for. If not everyone gets it that`s ok with me, but I don`t think we made it so cryptic that most wouldn`t be able to find their way through it.

Would you agree that "Travels" developes a very pessimistic panaroma of a person who fails to integrate the (post-) modern challenges within his character and personality? If not, what kind of alternative meta-levels do you see here?


Jay: Travels isn`t a happy story. There is a difference between pessimism and just stark reality though. When you are born the unfortunate truth is that a lot of decisions are already made for you. If your parents never figured out how to acclimate to the society they live in there is a good chance you won`t either. We only know what we have been shown. It`s horrible to say, but a lot of times if you are born from outcasts you will become an outcast and you will die an outcast.

How did you choose the models for the chracter photography in the artwork of "Travels"? And how do they correspond with the lyrics and the music of "Travels"?


Jay: They are mostly people Derek knew. I got really busy with the studio and told Derek Ok, no one knows the story and the lyrics better then you I need you to spearhead the art. Safe to say he did not let me down. We talked a lot about the different potential actors and then took way more pictures than needed just to make sure. I have to take my hat of to Michael the photographer, he was great to work with and did an amazing job. The front cover is our protagonist’s Mother, the back is the protagonist himself, the picture you see when you open the cover is the homless man from "Prophet in Plain Clothes", left inside panel is the farmer that gives him a job after he leaves New York City, middle inside panel is his mother`s priest who he talks to in "Cowardice", and the inside right panel is his abusive father.

Musically, "Travels" seems, at least to me, to avoid the traps of stereotypes and musical quotes. How did you develop the songs on this album? Who is mainly responsible for the musical output of Defeater and how does a Defeater- song progresses into it `s final shape?


Jay: I usually do the bulk of the song writing, and then bring the other guys into it slowly. After I have shaped a song I will often play it with just Andy and Gus and see how it feels and then we will collectively make changes from there. The song writing for Defeater is really never finished until it
`s time to press the record. "Prophet in Plain Clothes" had all bass notes in the bridge changed while we were in the middle of recording it. Sometimes you just don`t know until the end.

We know that you worked as a producer for bands like THE CARRIER, VERSE, SHIPWRECK A.D., SOUL CONTROL, CARPATHIAN and IN REMEMBRANCE, to name just a few. How does he effect the band as a whole? How much of the aesthetical vision related to Defeater can be traced back to his efforts as a producer, writer, author and so on?


Jay: It`s funny because I never really knew that I would gain so much perspective into song writing from recording bands but I really have. I am very big into setting a place in my mind that I am trying to get to before I start working, I do that when I record and I do that when I write. It`s always interesting to see what songs translate well live and which ones are better left on the record. I strive to write a mix of both if possible. I think in the studio things are more relaxed because we are all friends and we don`t need to stress out about how much time something takes. It`s nice to have that much control carrying an idea from my head all the way to final output.

The band info tells us that you are "ethically influenced by bands like Fugazi". Could you please sum up your band ethics and to what degree one could draw a line from Fugazi to Defeater?

Jay: What I really like about Fugazi is they never compromised musically. They have never been part of a trend and nobody has ever been able to emulate what they did. While I certainly identify and look up to that mentality that was them and we just want to do our own thing too. Fugazi didn`t sell merch but I personally think merch is yet another way to use art to execute Defeaters vision.

Andy, you run "Greenvans", a company providing tour vans which run on waste vegetable oil. What can you tell us about the reactions you get from people the first time they hear about that?

Andy: The reactions from people hearing about greenvans for the first time are everything from psyched and interested to dumb founded. Some people think that travelling on waste vegetable oil as an alternative fuel is the best thing they have ever heard, and some people either never knew you could do it, or don`t really care. For the most part, more and more people are aware of the fact that you can convert a diesel engine to run on kitchen grease and are genuinely impressed. When I first started, I think people cared more about our veggie van than they did our band! Now that Greenvans has turned into a serious business, I get a lot of interest from the other bands that we play with, mostly on the economics of renting a van from us.

Which bands already hired a van from "Greenvans" and did you already recognise that the interest in "Greenvans" grew a little?

Andy: The interest in renting a veggie oil van was there before I even started the company. I had my first van that we toured in, and other band’s ways asked me to borrow or rent it. I was reluctant at first, but when I realized I could make a little extra money and help other touring bands out, it became a real thing. We started small, mostly renting to local area bands for short trips, but now we`re a serious rental company with customers that depend on reliable transportation for big tours. Bands like Bane, Stick To Your Guns, La Crisi (from Italy), Trapped Under Ice, Big D and the
Kids Table, have all rented vans from us for long term tours.

Which environmental/political/gender critical projects do deserve more public interest and emphasis in your opinion and why?

Andy: I think any environmental project in general, specifically green technologies and alternative fuels, deserve more public interest. Not to say that they don`t have enough attention in the media, it`s just important for all environmental causes that have gained momentum over the last 10 years to keep moving forward, despite the current economic climate. A lot of green technologies like Bio-diesel, hyrdogen fuel cells, and algae bio-diesel gained a lot of ground as oil prices shot up. Now, we`re back to the cheaper alternative again, oil. This has happened before, and until we permanently latch on to new green technologies, we`ll keep falling back into our old oil-dependent habits.

Some last words or a line which sums up the last day for you? Here is your chance!