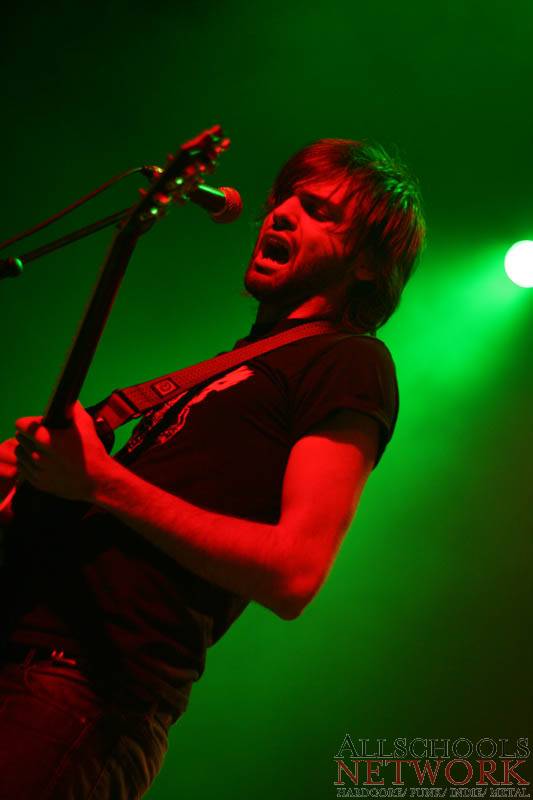 Formed in 2005, Gallows are an English hardcore punk band from Hertfordshire, England. Guitarist Laurent Barnard united with bassist Stuart Gili-Ross, and with the rest of their band mates released their debut album, Orchestra of Wolves. The album caught the attention of Bad Religions Brett Gurewitz, who released it in the US on independent label Epitaph Records with new tracks including a cover of Black Flags Nervous Breakdown. In an interview Gurewitz named Orchestra of Wolves as one of his favorite albums of 2007, praising it as being the best hardcore album since Refused's The Shape of Punk to Come.
The band won the 2007 Kerrang! Award for best British Newcomer, and were recently signed to Warner Brothers Records.
Roya Butler sat down with guitarist Laurent Barnard during Warped Tour to discuss the tour, their album, and why every Gallows show leaves audiences begging for more.

How did you get your nickname lags?

Barnard: When I was about 10 years old I was on the school football team (soccer as you Americans like to call it). At the time, I had a really good long distance goal score. Meanwhile, another player from Yugolsovia, who was a friend of mine called Dragenslocavitch, was scoring all these amazing goals for long distance as well. So he started calling me Lagenslocavitch. That name later got shortened to Lags, and somehow for 18 years its managed to stick. Thats how I got Lags, the nickname. I always get asked this question, so hopefully, now, kids can search and find out the reason why, so thats good.

You guys have been quoted as saying: If the crowds dont fear their own safety then we're doing something wrong. Can you elaborate on that?

Barnard: I think our singer, Frank said that. I feel like music's become really safe. Going to shows today isn't quite like it used to be. Back when hardcore/punk rock first started, there was an element of danger at shows--like you dono what's going to happen, and it was like exciting. But now when you go see a band, it's the same show every day--a rehearsed set. It's just a bit boring. We're trying to inject some excitement back into music.

Who are your musical influences? Do you guys like Minor Threat, Gorilla Biscuits, Sick of it All?

Barnard: Our influences range from all those bands to Discharge, back home, as well. [Discharge is a British hardcore band, credited as one of the first bands to blend punk with metal, creating hardcore].

What about Amebix? [Amebix is a Brittish crust punk band, credited as one of the first bands to blend anarcho-punk and heavy metal music]

Barnard: I actually listen more to a lot of American Hardcore like Fugazi, The Stooges--bands that are taking Rock and Roll and doing something different with it. I think with Gallows, we're not just a straight up punk or hardcore band; instead we incorporate loads of different musical elements.

Tell us about your recent signing to Warner Records.

Barnard: Its really a good opportunity for us to really push the band. It was wicked being on Epitaph, cuz they released some of our favorite albums, and signed great bands such as Bouncing Souls and Converge. But moving to a major label makes being in a band a lot easier--a lot easier to handle. Signing to Warner made sense for us, cuz it just meant that our band will have more support behind us. When we were on Epitaph we were very DIY. Although we like DIY, weve been playing in bands for over 10 years, and are looking to make Gallows work. So were really happy; everyones working really hard in helping us reach our dreams.

Can you tell us about the, now legendary, on-stage tattooing of your singer, Frank Carter, at the Reading Festival?

Barnard: We played a show at Redding Festival--which is a massive deal for us, and it was the first time we ever played it. We had just come back to the States, and it was one of our best shows ever. During our set, our singer, Frank was like ah yea this is great, and asked Dan Smith (a friend of ours, who had some of his tattoo equipment with him) to get his tattoo stuff. Dan got it, and brought it on stage, and we kinda forced Chad, from Newfound Glory, to tattoo a lock with seven dots on Frank. The seven dots was for 2007, and the lock was for the lock up stage which was the stage we were playing. It was a pretty spontaneous event. Thats what were saying: its good to have random things happen in music. If you come to a Gallows show, you know its not going to be exactly the same as the last show.

How do you feel about Warped Tour; is this your first time at Warped?

Barnard: We did Warped two years ago, and that was really hard. Coming back two years later is a lot better--more people know us, so the shows are better. Its going really well; we made heaps of new friends and got to hang out with loads of old friends as well. We know loads of bands, as well, now which is really cool--when they come out to the UK we get to hang out and see em again. So yea, its like the whole friendship/family vibe of Warped tour. The one thing Id say about Warped tour is theres a lot of non-punk rock bands playing, which is not something you associate with a Punk Rock tour, but I guess its like trying to attract different crowds. Being a hardcore/punk band, I think we're pretty different than a lota other bands on tour with us at the moment.

Tell us about your new album, Great Brittan, which came out in May.

Barnard: Its kinda like a concept record about everything thats wrong with England. Were not trying to say that England is a terrible place to live; it just has a lot of problems. The album focuses on all those issues. Its wicked; we spent so much time and money making sure the record is what it is today. This new album may not be something our fans expect, in listening to our past albums; theres heaps of piano and stringswe just tried to make a really big dramatic album.

Tell us some of the problems you focus on in the album.

Barnard: Quite a few, really: Youth Crimes, Politicians, ReligionI wish I had a record here so I could look at the album and tell you which song is about which. In whole, its basically a social and political view of living in England.

Your single, In the Belly of a Shark recently came out on Guitar Hero 3: Legends of Rock. Can you tell us about that?

Barnard: Were all massive video game fans. Weve got an Xbox there [pointing to the Xbox in their bus], and we got it especially so we could have one for the tour. We got asked if we wanted a song on Guitar Hero. If anything, it helpskids are gona play Guitar Hero, kids who have probably never heard of Gallows. Hopefully theyll check out Gallows, and then check out the bands that we likelisten to something different.

You have a Viva Hate tattoo on your forearm, is that in reference to Morrissey?

What does it mean to you?

Barnard: I was really angry when I got it--actually I got it done yesterday. And, I dono, its just like all my tattoos, they dont really mean much. Like I got this one [pointing to a tattoo of a key] when we were recording in the studio, so I got the key to the studio cuz it was a good time. Then [pointing to another tattoo] mom and dad. Then, [pointing to a tattoo of a rooster] a French cock, which means family in French. A lot of my tattoos dont mean anything though; I just like em. I get em cuz its a fun thing to do I think.

Anything you want to add?