Interview mit He Is Legend 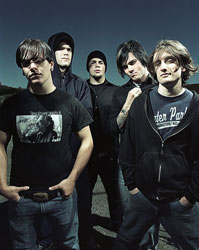 Im really good, it is going really well at the moment.

How was the response on Suck Out The Poison so far? What reactions did you gain from the press and from your fans?

It has been a little bit weired some of our fans arent really I guess responding something different and some others were gaining a lot of new things. I guess there are a lot of fans out there that just wanted to hear, you know, I Am Hollywood again and we just grew and we changed a lot. I mean it is just a little bit different but we are really positive and things are going really awesome. The fans really appreciate this, you know, and they appreciate that we wanted to leave some old paths and the fans that are there from the beginning, they understand everything. So that is really great. It is good to have that die hard fans who have been there from the beginning and who just want to support us.

What has changed in your life since your last record I Am Hollywood?

I think, back in days when we were recording I Am Hollywood we have never been on the road for a long period of time, you know? And I think a lot of the dudes get fed up with the music they have to hear and the whole fame stuff over and over again, you know there is a lot of really bad music coming out, you know

(laughs) I know that you at least know it. I mean it is good that there are people like you, like the people who understand what we are talking about you know? Because there really is a bunch of shitty bands coming out but they are still successful and have fans and we respect that and I dont know but you begin to start loosing the hope in music scene time after time. And I think that is what we did, we just wanted to put out a record we wanted to hear, you know? The music that we wanted to listen to. So I think that was pretty much what happened during that time and stay on the road the whole time, being sick, being tired like all this kind of stuff. But we are really proud of our work and record.

How would you describe your own music? I mean HE IS LEGEND can hardly be defined by one music-genre. You have really so many influences.

That is true. We always define our music as RocknRoll, you know I mean that is what it has been the whole time for us. I would stick to that because that is what we enjoy. RocknRoll is what we want to play and I think it is not that different to mention then NIRVANA, THE FOO FIGHTERS and the SMASHING PUMPKINS. I mean we are more aggressive and faster but it is basically nothing different. That is basically how we look at our music, we dont define us as a Hardcore band or a Metal band and I think that is one öf the things that messed it up in the beginnings because everybody did dig us into some categories because we were on a record-label that was pronominal Hardcore and pronominal Christian and we were neither, you know.

Thats quite interesting that you are not a Christian band but signed to Solid State Records in the States.

You think that people always define you as a Hardcore-/Metalcore band because you went on tour with such bands like ATREYU and NORMA JEAN in summer 2005 in Europe, for example?

I dont know. I think it is because we have played with so many bands from this direction. But we dont want do be put in any category. I mean we really feel good about it that we confuse people with our style. In Europe for example the kids are just excited about music and in America you have so many bands that people start to label some sort of band. I dont know if it is exactly the way I described it in Europe, but I feel more excited when it comes to the point to get to Europe in January. There is not such a drama about each music-scene, at least in my opinion. I think it is less dramatic over there and this why I really get excited to get over there.

How do you feel personally about your new record Suck Out The Poison?

I love it, you know, I am still listening to it which is strange to say because I listen to our own music. I think it is different than the stuff we are hearing and this time we have worked with great musicians, you know like the guys from the band they do their job well and I really was into weired writings and books and I think we all did contribute our part to this record and we are really proud of it. We did what we were supposed to do. I think it is really our best work til today but I think every artist actually feels that way. Everybody says that his actual material is the best ever done. But to answer your question I really think we have released a very good record.

Is there some kind of concept behind this record? On your homepage you described your music as a collection of fairy-tales.

There is not a concept in general behind this record but some songs do fit together most of the songs are written as short-stories and I mean I would be rather known as a writer than as the dude in a band. I think its just from the writing process I tried to combine the stories together. I mean I rather use the imaginary rather than singing about girls. We dont sing about stuff which is overdone. There is no real concept behind this record but there are some lyrical concepts you can get together in a certain way.

What do you regard as your Main-Influences lyrically when you start writing a song?

I was reading a lot of crazy books and stuff. I dont know I got less influenced by literature than films or modern musicians. I really got influenced by musicians like PINK FLOYD, NICK CAVE and just people who tell stories, you know? Good stories. That is where my influences were drawn but I think everybody in the band listens to a lot of the stuff we grew up with like SLIPKNOT, SEVENDUST, you know, DEFTONES and NIRVANA and all this stuff back to roots. Listening to music that influenced us and makes us do music together.

Who had the idea to come up with a female voice in the song CCClouds?

Actually this is Laura Sweeney, the girlfriend of our manager. She has got a beautiful voice and she came out and she really knew exactly what we wanted on this track and it worked up really well. It was really cool to get her in there because she was feeling what we want to do in this song.

Tell me more about this song. It is a very long song and in some other interviews you have mentioned several times that you are actually really proud of this song.

Yeah, we are really proud of it and I think it is probably my favourite song on the record. It is just I think it shows really well what has influenced us because you can find some metal stuff, some darker spheres and this all came across when we wrote this song and we wanted to add everything in this song. This song was the one each member of the band was focussed on. It is really an emotional track and it is really dark and heavy but I think it tells our musical story. This is the song when we have written we were all like Yeah this is it! This is an awesome song.

I have seen the video for the song The Seduction a several times and I think that this is a really cool concept behind this video. So who is responsible for your videos?

We should do a video for I Am Hollywood and it was was like do what you want but it is quite hard to do a video for 10.000 $ and the only way that we could do the things we wanted to do them was to use this puppets and it was more like a joke and we thought like Yeah this is the way it should be but it was not meant to be serious. But we have a video for Attack Of The Dungeon Witch that will come out in the next time that our friend Taylor Danded did for us. He is a photographer and movie director and he is like one of our good friends and he is doing like film-photography but it is going to be really cool and you should keep an eye open for that one when it comes out.

What do you expect from your upcoming tour with NORMA JEAN in January?

I think it is going to be awesome with all the other bands too. I mean it seems like some kids are really excited to see us and that makes us really excited about going to Europe. Im sure it will be really great and I dont know what I should expect.

Okay, I have no more questions, but maybe you have some last statements?

Yeah, if you guys like us, then come out and show up at our shows in January tell your friends. And we also dont care if you burn the record as long as you get out and let me hear it! We believe in it and so maybe you will, too!

Okay, thanks for the interview!