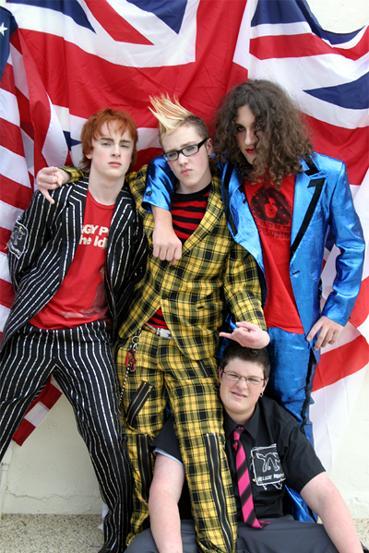 1. Hey guys, first of all, congratulations to your new album. It turned out great! How is it going for ORANGE in the States?

2. Please give us a short introduction to the members of ORANGE.

3. Your album has just been released in Germany. What are your expectations?

Total World domination. Were building our fanbase right now and thats what were focusing on, getting more and more fans out there to support rock music!

4. Are you planning on touring through Europe as well?

We are, but not as soon as we will be touring California first. Possibly by christmas time, so look out germany!!!!

5. You guys are very young! What are the reactions on your age?

Oo lala. Lots of different reactions for that one. At first there was alot of not so nice comments saying "you didnt work for it" blah blah blah. And of course there were ones like "One word... Inspiration"! And thats my goal exactly. To inspire every kid who buys this album to go and buy a guitar and start a band. We did it. And you can do. And trust me we have worked for it, endlessly, four years, every weekend, saturday and sunday. No time for friends or any thing a regular teenager would do. So we've worked for it my friend. We've made quite a few sacrifices to get to be where we are now! and things can only get better!!!! Were very excited and super happy!

6. It took ORANGE a pretty long time to find the perfect cast. Are you still in contact with all your former band members? 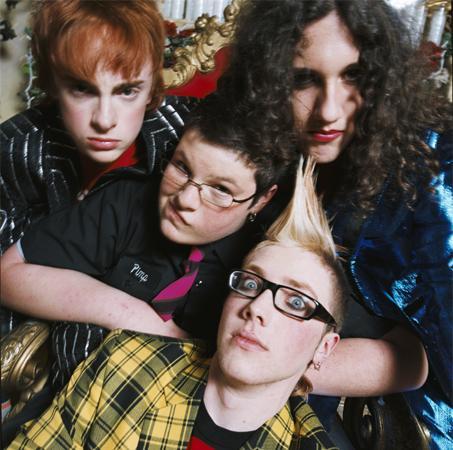 Hells No! They left on their own terms. Nothing against em, they were cool. But no we dont talk to them. We still send em albums tho!!!!! tee hee hee.

7. How did they react to your success like being signed by a label like Hellcat? Do they envy you?

8. The song No Rest For the Weekend was used for a commercial for an Apple computer's "garageband" program. Did that popularise ORANGE in the states?

Nope. Not at all. The commercial never ran on TV, it was just for conventions. And they only used a 10 second clip of mike fiddling with garage band in their shops. But we did get a free music video out of it!
9. How commercial can a band get, and still be punk rock?

As commercial as Greenday! Look at them, they worked for it for 10 years, never stopping and always going at it. Finally, they got what they earned, the number one album in the world. They are still punk rock band but with catchy pop punk songs. Thats our goal too. Great punk rock that you can sing alot to. I dont think it even matters, as long as your doing what YOU do, thats all that matters. Whatever YOU want to and what YOUR happy to do! Thats what punk is all about, what you believe in no matter what. Its more punk to like Ashlee Simpson
than to not like her!

10. Punk music has really gotten popular in America. Do you think you would have gotten where you are within three years, if it wasnt for the trend?

No. Thats got nothing to do with it. Punk rock only became popular after American Idiot came out over here. We had our record deal by then. So no. A major label would probably sign you on those terms but hellcat, they believe in the music they do and what they put out there, it represents them as well as us! So punk rock music, it'll never die thanks to labels like epitaph and hellcat!!!

11. Do you still go to school, or do you want to live of the music?

Fuck school in the vag. We all hate school and its a fucking shitty waste of time. I left school a year ago now and jack and zak do home schooling. Mike still goes to normal school because they got a good media program. I learn more from The Simpsons that I ever did in school!

12. What are you guys doing if you are not making music?

13. What are ORANGEs future plans?

Like I said, total world domination. Hotel production, movies, orchestra themes, porn. You know, the usual. But more seriously, we want to do this forever, and we will and nothing, absolutely NOTHING, will ever stop us. Our record just came out today and I've been awake
for about an hour now. I cannot wait to get out and fucking crash every record store in LA and see our hard work on the shelves for the whole entire world to see. Thats the best part, everyone, i mean everyone can hear this record, whether your in germany, england, japan or LA. You CAN go buy this album from any where you want too! And that is truley a magical feeling... Thats what its all about.

14. Thank you very much for your time and good luck for the future. The final word is yours!

Join the "Runk Radicals"! Its our fanclub and were also looking for street team members in germany so you can send me an email from our website www.orange-band.com and we will send you the holy package! You can do all this and more at our website!!! Add us on
myspace.com/orange!!!!

"Never give in, Never give up. Fucking Love and live your life and just
fucking ROCK!"