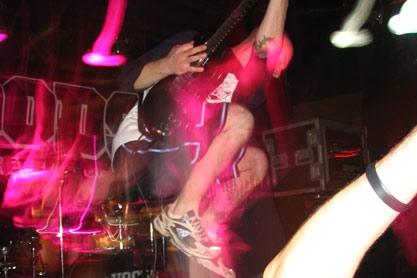 01. Please indroduce yourselves briefly. Who is currently playing in PALEHORSE?

My name's Dave Heck and I play guitar. The other current members of palehorse are Dave Lepage, Vinnie Calandra and Joe Longobardi.

02. A few weeks ago your Album "Amongst The Fock" was released. How were the reactions of your fans and did it come up to your expectations?

The album has been very well-received by the kids that come out to our shows. Our crowds have gotten bigger and I don't think we've lost anybody. I feel it met most people expectations, but I'm not sure if there was a very high level of it for this record, but who knows.

03. Your first EP was released via Martyr Records, but you weren't very happy with the way they treadet you. What exactly happened?

I wasn't in the band when that went down, so I can't give you too detailed an answer to your question. Basically, the record came out later than it was supposed to and the label fell apart shortly after it was released.

04. How and why did you choose Bridge9 as your new label?

Chris Wrenn, the guy that started bridg9, and our singer are old friends. When the contract with Martyr was done, Vin sent Chris and email expressing interest in bridge9, the feeling was mutual, the rest is history. 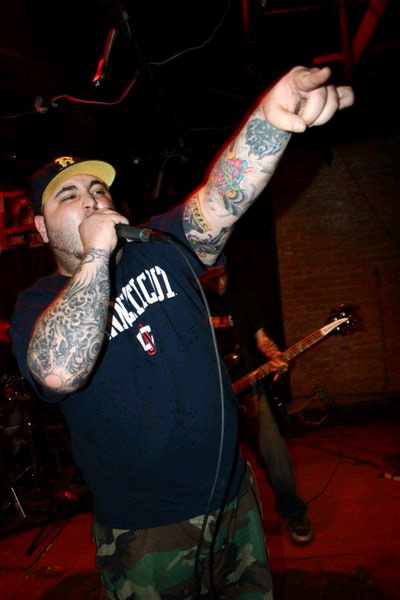 Very much so. Bridge 9 is a cool label to be on. They are fair and know what's up with the hardcore scene, As far as the record goes, we couldn't be much more happier with how it came out. Besides some artwork printing problems, we don't have much to complain about at all.

06. Your original second guitar player John Tamas passed away a few years ago. (Sorry for your loss!) How did you come up with Dave Heck as his replacement?

I play in a band called Leavenworth from the Philly area. Our first tour shared some shows with Palehorse's first tour, and we hit it off well from the start. Over the years we've kept in touch, playing shows together and what not. When they decided to look for a 2nd guitar player after about a year of not having one, I stepped up to the plate.

07. You were on Tour with TERROR, FULL BLOWN CHAOS, BURY YOUR DEAD, WITH HONOR and OUTBREAK. Those are huge Names here in Germany. PALEHORESE isn't well known yet. How is it in America? Do people know you just as good or is it even there a big thing for you to play with such bands?

I feel we are a band who people recognize, but don't know quite yet. The average hardcore kid has probably hear of us, but maybe hasn't listened to us yet. I could be wrong. It's still an honor to play with many of the biggest bands in hardcore, but they are still hardcore bands just like the next.
08. Do you know any German Hardcore bands and what do you think about them?

Leavenworth covers an Acme song and I helped book some of the US shows that In Blood We Trust is playing, but I'm not too familiar with many of the bands out there today. I look forward to learning more though.

09. Please tell me about your perfect line-up for a show.

10. There are Bands like BITTER ENDS and RECON as your "best Friends" on your MySpace side. Are you really friends with them or is it just for the fame?

Haha, all our friends are really our friends. We are probably the least likely to suck up to anybody or any band. Bands like Bitter End, Recon, Fight Like Hell, Shipwreck, Folsom and Hoods are all bands we've toured with a lot in the passed year or so and we love them to death.

Tour our asses off and take over the world. Straight up.

Darf ich auf die toilette gehen, bitte?
That one of the only things I remember from German class. haha