My name is Kelly and I play the guitar and jump around like Im in Fallout Boy. 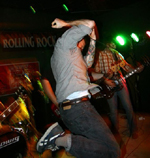 Tell me some facts about your upcoming record Facetious Folly Feat

At the end of the record there is a sample buried in one of the songs from a movie that is totally sweet, and wed totally get sued if the movies studio ever found out, so dont tell.

Has the name of your record Facetious Folly Feat a special meaning?

Its about how we all disagree on just about everything that is related to the band because were all crazy, but somehow we still get things done.

Who is responsible for the song writing and where do you get the inspiration for your songs?

Musically, we all contribute. Each of us write riffs and songs individually, and then bring them to the band where we argue and criticize and rebuild them. Lyrically, its all Scotty. Although I cant totally speak for him, I know he writes largely about things that he experiences in his personal life, whether its in a small scale (relationships) or a larger scale (religion, politics). 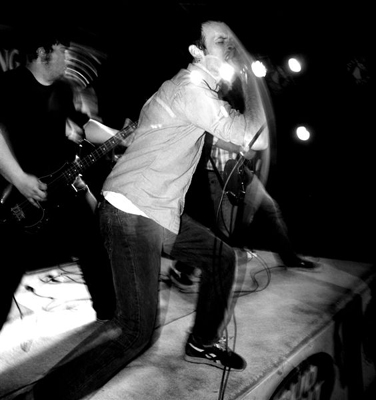 What are your Main-Influences? When I listened to your upcoming record I always had to think of Kid Dynamite!

Obviously we love all Dan Yemin-related records. Beyond that, we all listen to tons of different stuff so its an odd mixture of what comes out of all of that. I love bad pop/punk like Taking Back Sunday and Fallout Boy, Scott worships Billy Bragg, Nasty listens to anything with good production, Bo listens to anything even without good production, and Funds likes metal and old punk. Combine Entombed, the Misfits, Rainer Maria, New Found Glory, Look Back and Laugh, and Sonic Youth, and youve got a ride in the Shook Ones van.

How is your relation with Sinking Ships? You went both to Europe for touring.

Very much like high school sweethearts. In our Sophomore year of band-dom, we met and have been together ever since. Our personalities our pretty different, and weve both seen other people on occasion, but somehow we always end up back in each others arms. Its probably the sex. We have great, great sex.

How was the tour? How did the people react? Was it how you expected it to be?

Amazing. Europe is fantastic. Even the worst shows were better than most of our shows in the states. In general, Sinking Ships blew us off the stage every night, but we still had a blast. There were some kids who were into us, and the fact that even one kid in Europe might be into us is pretty fucking amazing when you think about it. We didnt really have many expectations beyond having a fucking great time, and so in that way it was exactly what we expected. Some of the toilets were kind of weird, though. Whats up with the shelves? And whats up with the extreme amounts of attractive people? Not like that has anything to do with toilets, but those were the two most noticeable things about being in Europe. 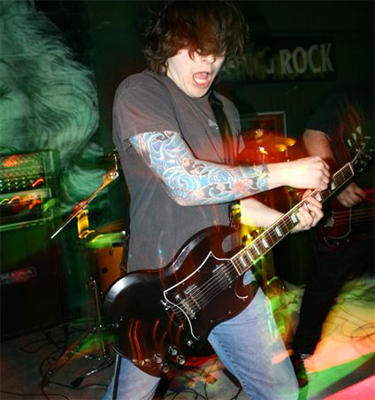 How did you get the Deal with Revelation Records and how do you feel related to this Label and the bands who are signed at this label?

We were touring with Sinking Ships for the first time, and they were talking to Rev at the time. Somehow we got involved in the conversation, and one thing led to another. Rev definitely put out a few mediocre records in the recent past, theres no denying that, but they also put out some great records, both currently and historically, and its a huge honor to be a part of that history. I mean, were labelmates with Gorilla Biscuits. Thats crazy!

Were actually from Washington Stage, but truthfully DC has nothing on the Evergreen State. Nirvana, Soundgarden, the Sonics, Sicko, Botch, Sunny Day Real Estate, Candlebox? DC may have a more respectable history, but Washington State has sold way more records. Look at the average record collection, and it probably has more Washington-related records than DC-related records. And anyone who says they dont like Nirvana needs to stop posing. 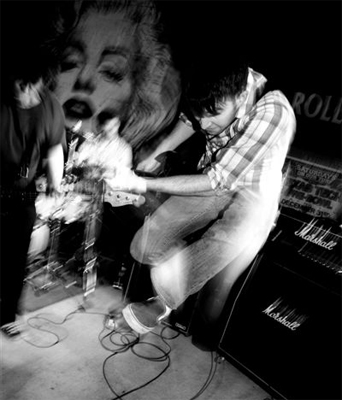 It seems that combining melodic hardcore/pop punk is becoming increasingly popular! How important is it for you to do something different an have an individual style?

We do what we love, and it comes out of the music that we listen to and love. Obviously we make no excuses about paying tribute to our favourite bands, but we like to think were taking that and expanding upon it. If someone listens to us and thinks we sound exactly like Kid Dynamite or Lifetime, thats cool. We dont necessarily agree, but its definately still a compliment. Hopefully people give us a little more credit than that, but were gonna keep doing what we love whether they do or not.