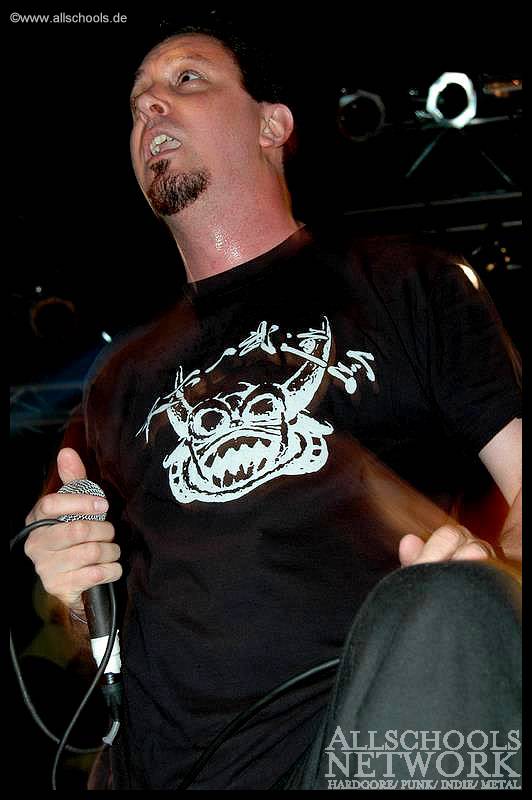 New York hardcore band, Sick of It All (SOIA) was formed by brothers Lou Koller (vocals) and Pete Koller (guitar), Sick Armand Majidi (drums) and Rich Capriano (bass) in 1986. Hailing from Queens, New York, SOIA was formed alongside New York hardcore bands Straight Ahead, and Rest In Pieces which both featured Majidi and current Sick of It All bass player Craig Setari. Majidi joined up with the Koller brothers and Rich Capriano to record the Sick of It All demo in 1986, after original bass player Mark McNielly and drummer David Lamb left. The band began to play Sunday afternoon matinees at legendary venue CBGB's, and soon after released a self-titled 7" on Revelation Records (which was later re-issued on the tenth anniversary of its release, in 1997).

SOIA is now touring off their latest release, Death to Tyrants.

Roya Butler and Hannah Wagner sat down with frontman Lou Koller at the First Unitarian Church in Philadelphia, to talk about Death to Tyrants, touring, and their upcoming DVD.

Roya: Tell me how everything in your life has changed since I last saw you five years ago. Back then you had a girlfriend, and then you married her. When did this all happen?

We moved in together six years ago and we got married last year.

Roya: Congratulations. Tell us how your music has changed along the way.

With the band, we finished our deal with Fat Wreck Chords. We decided we got to a point where we got very complacent on Fat, and we got very used to doing things a certain way, so we just had to shake it up for ourselves. So as we approached our twenty year anniversary in 2006, we left Fat Wreck Chords and signed with Abacus/Century Media. So we sat down that year and tried to write a really good record, and released Death to Tyrants; we’ve been touring on it ever since. 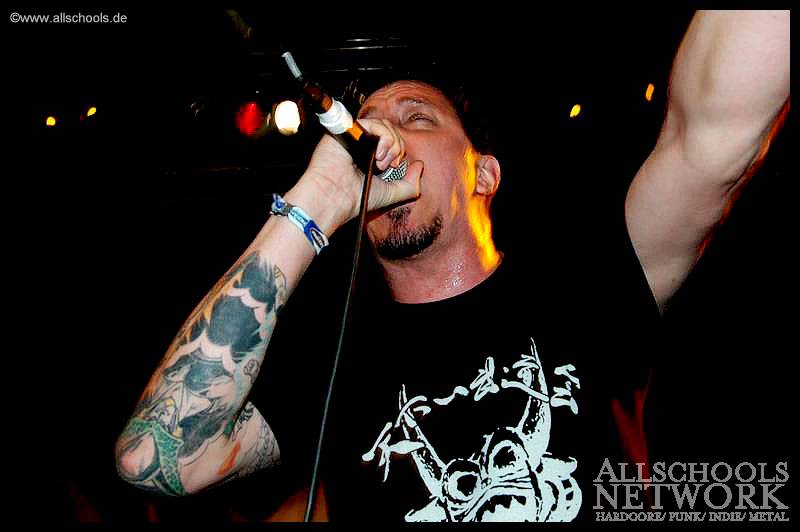 Roya: Tell me how it’s different from your previous releases.

Like I said with “Fat,” we got into this routine of touring for two years, going home, writing for a month, putting out a record, and then going back on the road for another two years. With this record, we took seven months off just to write, and we wrote and demoed and wrote, which is something that we haven’t done for years. We got a really good producer – Tue Madsen from Denmark. He’s done a lot of really good bands. He’s done Himsa,The Haunted, God, I can’t even remember, because he’s done a lot of bands – a lot of real more metal bands. But he’s a fan of Sick of it All and he kept asking to work with us. So after we finished demoing and writing, we all went in the studio together, and it just clicked really good. It differs in that we took everything from our careers and everything we’ve learned and took it to the next level. We really pushed ourselves. We can’t “sing” sing, but we can scream in key, and we have melodic parts where we scream and sing, so it came out good.

Hannah: Is your “screaming in key” more like melodic metal?

I don’t know. It really comes more from old school punk bands and oi bands that would sing with a raspy tone. And that’s pretty much the style that I grew up listening to. I loved metal, too, so I was totally into Motorhead. I thought, “If Lemmy can carry a tune, so can I.” So that’s what I figured.

Roya: How has married life changed you?

Not much. We have fun. My wife comes out on tour a lot. We’ve been to Japan twice now. Europe we’ve been to – I don’t know – a million times…

Hannah: Can you tell us what it was like to tour in Japan?

I love it. Last time we went was last year. We hadn’t been there since 2001. In fact last year we hadn’t been there since 9/11 when it happened, and we hadn’t been back since. Not for lack of people wanting us, but it just didn’t feel right. We felt we didn’t have enough presence with Fat Wreck Chords there. But last year we were invited to headline at this festival called the “Magma Fest.” It was us, Madball, Bouncing Souls, a bunch of bands. It was great and reestablished us not only in the eyes of our fans, but a lot of the big promoters over there were really excited and said, “wow, Sick of it All hasn’t been here in six years and there’s 2,500 people here just waiting for them.” So it was great.

Hannah: Do you have a big fan-base in Japan?

Roya: What have you noticed in Japan and Europe that’s different from the U.S.

I think in Japan, music trends are really trends there. For example, hardcore was big in the late nineties and then it just dropped back down again to an underground level. In Europe, what I love about Europe, compared to the U.S. and Japan, is that we have fans that have been coming to see us since we first started going there in 1992, but now they bring their kids. And for us, it’s weird, because we’ll play the United States, and in some states and it’ll definitely be a 21+ crowd even though it’s an all ages show. And so I guess in America a lot of the younger kids have more bands their own age that they like, or their generation of band. In Europe, they tend to respect our longevity and our history more, and it’s amazing to us to go over there and to play every night to 1,500 or 2,000 people, and the age rages from sixteen to forty. So that’s why we spend a lot of time there. 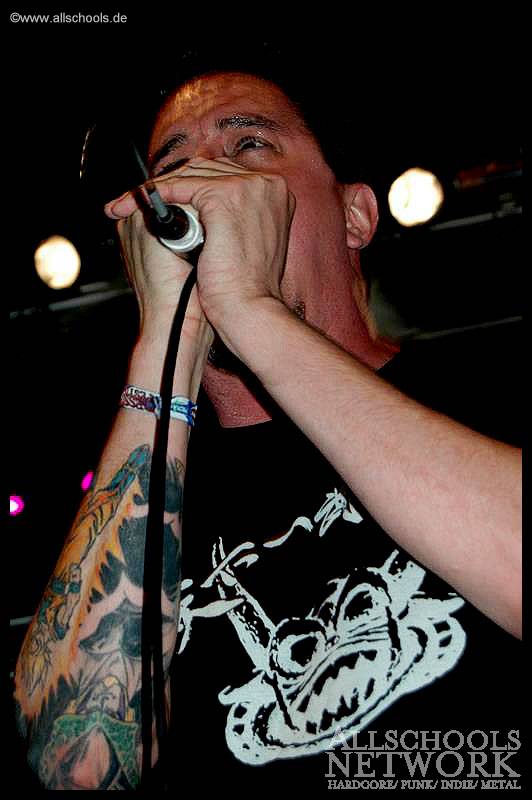 Roya: And how is it playing in the UK. I hear there’s a lot of violence there since 9/11.

It depends. Like in America, there was the whole “thugcore” movement. But when we play we still get a good mix of crowd. We get the punk kids, metal kids – the thug kids still respect us for some reason. But we have a great time, and we’ve never had any problems in any of our shows in Europe.

Roya: What is the thugcore movement?

It more bands that have the “tough guy” image. It stems from bands like Agnostic Front, and the Cromags, and Madball, who grew up actually living a hard street live. And then there are these kids who want to emulate it. It’s kind of like ganster rap. It took off in Europe, and I’m not saying that there aren’t hard areas in Europe, but we found it funny when some of these bands would sing about how tough their life is and you find out that they’re from a farm in Holland. What do you fight cows? What are you doing?

Hannah: So are they really interested in urban culture like in America when they don’t even experience it for themselves?

Definitely, you see it over there in the mainstream in the hip hop culture that’s so big there. It’s funny for us to go to Japan or Europe and see people in low riders looking like they’re “cholos” from the west coast. That’s what it is. They’re just emulating an urban culture.

Oh, definitely. One thing we export well is our culture, and music, and movies.

Roya: Tell us more about Death to Tyrants, your tribute album, and what you have in the works for the future.

Well, the last album we produced was Death to Tyrants. Put it out 2006 at our twenty year anniversary. So that’s still out. A year later a tribute album to us was put out. It’s called, “Our Impact Will Be Felt.” We’re really proud of it, because of the variety of bands that are on it. You have Sepultura, Hatebreed, and Unearth. But then you also have Rise Against, Bouncing Souls, Kill Your Idols, and bands that like. So it’s a good mix of really heavy bands that we’ve influenced and also hardcore and punk bands. And we’re really proud that all these different acts, big ones and small ones. Like Kill Your Idols and No Redeeming Social value are bands that nobody even knows, but we included them on with big bands, because they’re our friends and they’ve said that we’ve influenced them. So we’re really proud of that, which is out now. And as far as us, future projects, we’re sitting down to write the new record. And we’re filming the last show of this tour which is tomorrow in New York City for a DVD. We have so much footage from over the last six years we’ll see what happens. We’ll try to put something together.

See that’s the thing. We don’t know yet. We have all this footage, but we haven’t sat down and they haven’t interviewed the band yet. What we’ve been talking about with the record label is that our main idea which we want to get across is to have people interview fans of the band. Like I said, maybe people who just got into us a year ago, or people who have been into us forever, just to see what is the difference in what attracts them to the band. And it would be easy enough to do, because we all hate doing camera interviews. We feel really silly. *laughs*

Roya: Is there anything that you would like to add?