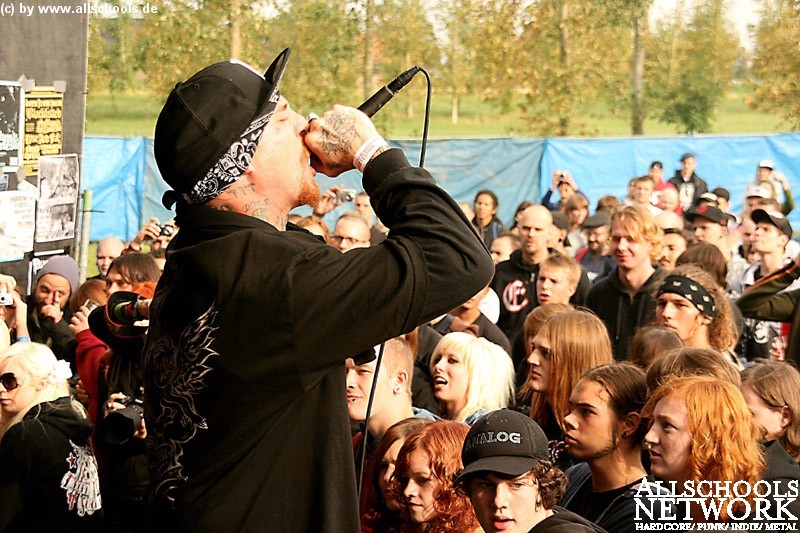 1) "Kings at Crime" was released more than 10 years ago. When did you come up with the idea to release a new SKARHEAD record?

2) How did the new songs evolve. How did you get all the feature guests together?

I had White Owl, White Wolf, Riggs, Wes, A.K. Ray and Matt in the studio with me as paid studio musicians so it was easy for me!!! We all work together very well. All the guests are friends of mine, so they came down and had a great time. I wrote this record on the spot and showed the world that no one can do it better then me!!! This record blows away any hardcore record in the last 10 years!!!


3) What is your definition of Thugcore?


4) Being linked between the world of Hip Hop and Hardcore, where do you see the similarities between the scenes, what separates them from each other?

Hardcore kids are way harder then hip hop kids!!! But hardcore kids tend to whine more about the scene and stuff like that. I think a hardcore show is way more entertaining then a hip-hop show. I tend to bring the hardcore element to my hip hop shows. Hardcore 4 Life!!! 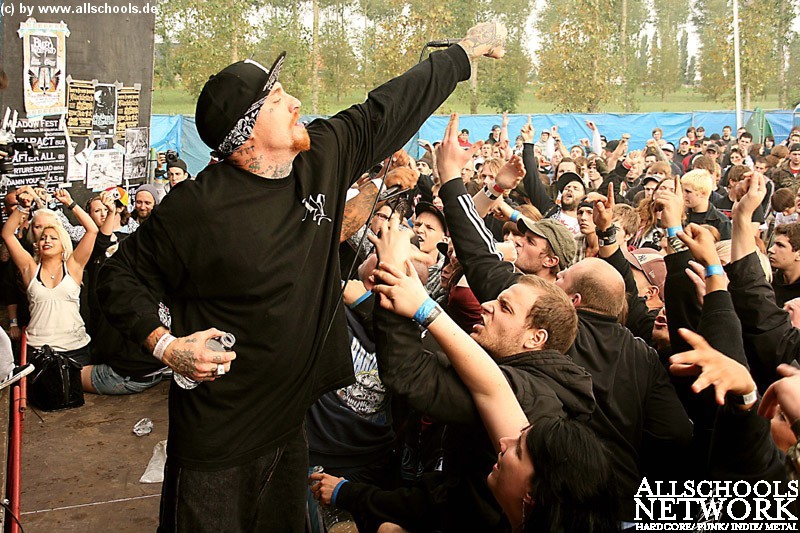 5) The booklet of "Drugs, Music and Sex" contains a lot of pictures of Graffiti pieces and T-Ups. When are they dated and are you still involved in the Graffiti scene?

I been writing Graff. since 1985. I used to be crazy with the graff. wars back in the day. I was bombing hard from 87-94. I now do my thing when ever I can. I can't afford to get locked up for street bombing like I did back in the day. But I still destroy shit especially on tour all over the world. I have a clothing line called "LORD EZEC STREET WEAR" and I sell mad graff. shirts. You can find my t-shirt line on ill-rocrecords.com Risky, Mque, Stea, Charm, Haeler, Payaso, Make and I have contributed to the t-shirt designs.

6) What do you think about today's Hardcore scene with all the new bands coming up? Most of them are very political correct, positive thinking, middle class kids..

Fuck Politics!!! The reason I got into hardcore was to forget about the fucked up world we have!!! I think it is cool that kids are in favor to help the environment and the whole organic thing but politics are fucked up. If you are doing something to help out the world, then I am cool with your message. 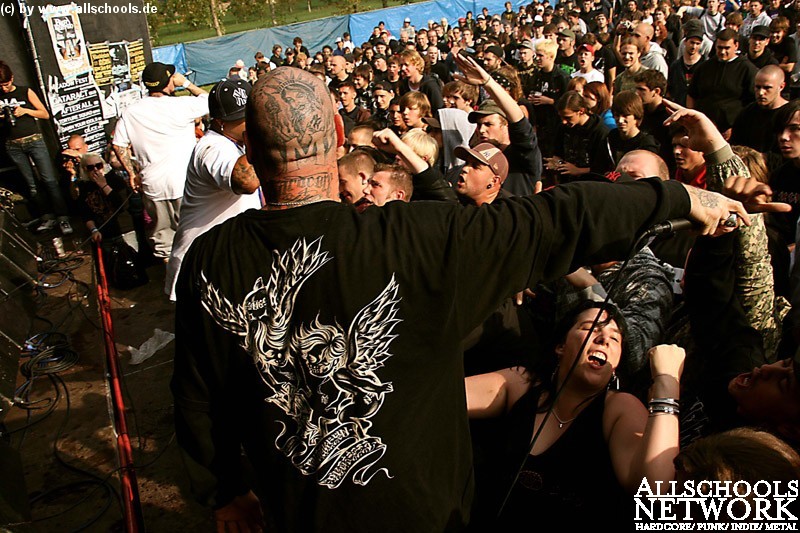 7) SKARHEAD is one of the bands being really involved in D.M.S.. Could you please give us a better understanding of the crew?

There is nothing really to understand.


8) There are a lot of definitions circulating for D.M.S. Like Doc Martins Skinheads or Demonstrating My Style. What are yours?


9) D.M.S is said to be a crew the cleaned the scene from fascistic tendencies. On the other side D.M.S. has the reputation of being a gang brawling at shows. What is your side of the story?


DMS is what it is. There hasn't been a DMS brawl at a show since 87!!!! Lets get shit straight and correct. We were kids and stepped into the scene and beat down the nazi punks. We are street kids so we had a street mentality to everything we did when we were young. Then we told the older guys that this is our scene and they did what they did, they had no choice but to let us take it over and shut there mouths!!!

10) What do you think about violence in the scene in general?

IT IS WACK TO BEAT DOWN LITTLE HARDCORE KIDS FROM THE SUBURBS!!!

11) What is your opinion on straight edge (Apart of the song "big payback")?

Straight Edge is cool. I never had beef with the straight edge movement. I consider Carl from Earth Crisis a brother of mine. The song the "Big Payback" was not a diss to the Straight Edge movement!!! We were dissing this dude who stole money from our tour who was supposedly straight edge.

12) You've been to Ieper Fest last year. How did you experience the scene there?

Dope!!! Love doing the festivals in Europe. Europe is a great place to visit and have fun. 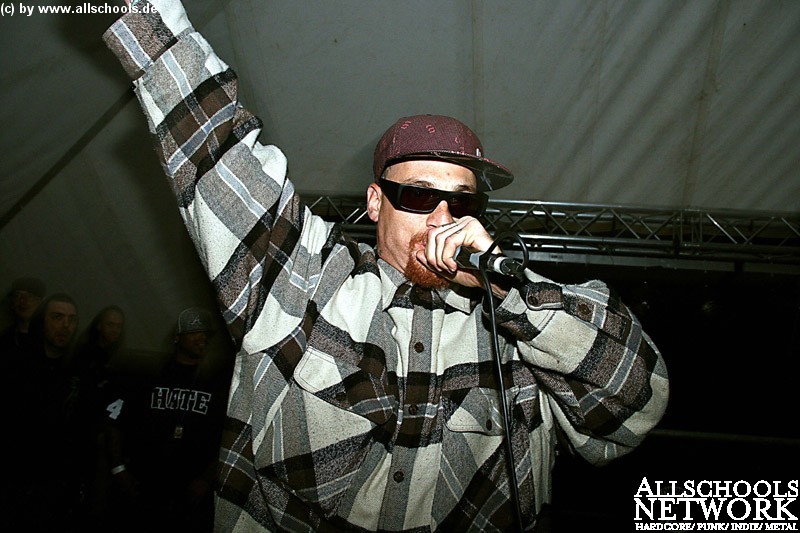 13) What other projects are you still working on?

I got my website up ill-rocrecord.com ill-rocrecords.com . I am gonna do a new ICEPICK record soon, almost finished with the KAOS 13 project with Grizz from Ruff Ryders. Finshed the new Shotblocker record. Danny Diablo "International Hardcore Superstar" is out now on iTunes. Gonna do Jewish Gangsters with Necro and the Riviera Regime next year. I am directing and producing videos and music projects like Skam Dust. I am also working on new movie roles. The hardest and most busiest thing I do now is that I am a full time dad! Check out all my official music and merchandise at ill-rocrecords.com . ILL-ROC RECORDS is now official and up and running in the States. Check out Countdown/ Real Recognizes Real Records for my stuff in Europe. 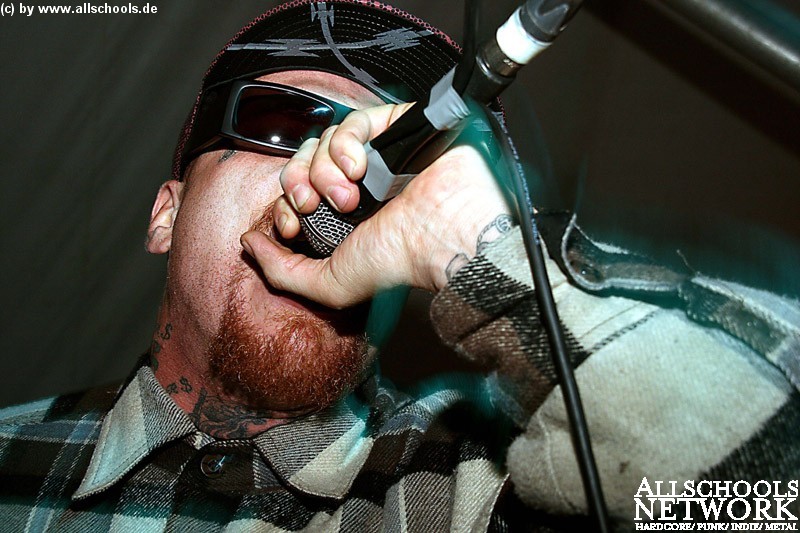 14) What can we expect from SKARHEAD in the future?

Buy all my shit!!!
Skarhead rules! Thank you to ILL-ROC RECORDS, COUNTDOWN RECORDS, REAL RECOGNIZES REAL RECORDS, I SCREAM RECORDS and all my friends and family in Europe!!!