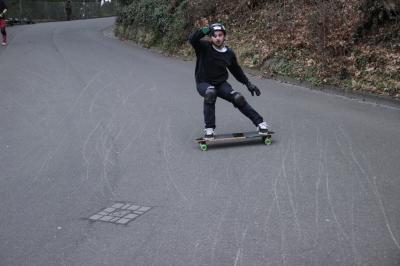 Congratulations to your new record! It sounds in my ears very passionate and exciting – and not just because you’ve become again a little harder, but more because you became again more progressive. Some say the reason is your new-old guitarist Peter Wichers, but for the record: Who or what really made this record to what it finally is?

Thanks! I feel pretty much the same about “The Panic Broadcast”. Peter’s return to the band definitely lifted our spirits. The “Sworn” years weren’t the easiest times for us as a band, but the past year and a half have been nothing but confidence and optimism. Sylvain’s arrival made a difference too; both Peter and him brought along a lot of positive energy and creativity which stimulated the rest of us. Once we finished the touring cycle for “Sworn”, everything just fell into place. The new songs came together naturally. I guess there was quite some pent up anger, and we decided to tear down any boundaries that may have built themselves over the years. All this probably explains the heavier and more progressive aspects of the “The Panic Broadcast”. This album is 110% pure and sincere SOILWORK.

I guess you hear often this question, but honestly: Were you really satisfied with your latest record? If I had to be honest I would say I liked some songs really much, but as a complete album I couldn’t enjoy it that much like your previous records (which includes for me “Stabbing The Drama”, which I also really liked). Also, the production was not really my cup of tea, and lot of fans think the same way I do. Now with “The Panic Broadcast”, all this problems seem for me solved.

When “Sworn” first came out, I was very happy with it. Other people in the band were a bit more skeptical. Retrospectively I agree it’s not a perfect record. I guess when you’re in the middle of something, staying objective isn’t always evident. We worked extremely hard on that album, but there were diverging opinions regarding the musical direction to follow. It was really an untenable situation and it took us a while to realize that; hence the subsequent line-up changes. Looking back, it’s no surprise that “Sworn” became what it is. I still think songs like “As The Sleeper Awakes”, “20 More Miles”, “The Pittsburgh Syndrome”, “Sick Heart River” and the title track kick major ass. As far as the production goes, we wanted to try something different and doing so turned out to be more hectic than we had anticipated. We wanted to avoid the triggered, over-produced type of sound that a lot of bands seem to go for nowadays. “The Panic Broadcast” is really how we aimed for “Sworn” to sound, production-wise.

What I really really like about your new record is the guitar-work. There are some really incredible melodies and riffs I just couldn’t believe, because they sounded so fresh and well, like I said, passionate. How did this come up? Were there special influences (for example in music) or special things in life which brought back all this passion and creativity?

Thanks man! The answer is really pretty simple: we have two incredible guitar players in this band! Peter and Sylvain are highly skilled technically, yet their focus is always on tasteful playing. They both write and arrange music in a masterful way and all the credit for the guitar parts on “The Panic Broadcast” goes to them. As for the passion and creativity, that’s the place we’re in right now. We respect each other and we know how to deal with the common issues that come with running a band. When things go smoothly on a human level, the music will follow. Truthfully, we’re not jaded in any way. Our passion for SOILWORK is very much alive and even though this is our eighth full length record, we still have a lot of music left in us.

You can look back to a lot of records in 15 years band-history. Which are your favorite of them? And what is your opinion of your two first works, “Steelbath Suicide” and “The Chainheart Machine”, which are often forgotten in your discography?

Right now my favorite would have to be the new one. As cliché as it may sound, we all feel that “The Panic Broadcast” is our best work yet. I haven’t really listened to any of the older albums in a while, but “Natural Born Chaos” and “Figure Number Five” were fantastic records when they came out. I didn’t really get into “Steelbath” and “Chainheart” until I was playing some of those songs live and I can really appreciate them now. They have a raw intensity to them that’s unique to that early period of the band. As albums they’re still very relevant. Our friend Mattias Nilsson actually remastered both those CDs last year and Listenable re-released them with live bonus tracks, new artwork and liner notes. We still perform the old material live; right now there’s obviously a focus on the new record but we do add tracks like “Chainheart Machine” and “Sadistic Lullabye” to our setlist whenever we can.

Wasn’t there ever a point – after all these years and records - where you didn’t wanted to play in SOILWORK anymore? Or were with albums like “A Predators Portrait”, to “Natural Born Chaos” and finally “Figure Number Five” a good way of escapism, because then you tried something new?

I’ve been playing with SOILWORK full-time since January 2004. There have been ups and downs throughout the years, but that’s life, you know? When the band hits a wall, we do what’s necessary to move ahead. There have been some negative elements trying to keep us down, but in the end, our passion prevails. We’re still here doing what we love and it’s mainly because we continually work our asses off. We’re also very fortunate to have a tight group of people who believe in us and help us out with endless generosity, such as our fantastic road crew, our label and booking agents. And of course, we have some very loyal fans worldwide, without whom we wouldn’t be here today. It’s all about finding the right balance. Every record is like a snapshot, it’s the best we could offer in that precise period of time. Some end up being better than others but we always give everything we can. We wouldn’t release anything we’re not proud of. The three albums you mentioned were defining moments in the creation of the SOILWORK sound. As far as I’m concerned, we’ve reached a new high with “The Panic Broadcast” and I can’t wait to experience the next chapter!

And after all these years: Is there still something you want to reach? Or are you pretty happy at the point there you at this moment are?

I think I can speak for the entire band and say that we feel extremely fortunate to be doing what we’re doing. Our motivation and ambition are stronger than ever, but at the same time, things are pretty amazing the way they are. We write music without compromising for anyone outside of the band, and we play shows for fans all around the world… How much better can it really get? Of course, it’d be nice to have a steady income. We can’t rely solely on the band to survive, but the potential is there and we keep working hard to spread the word about SOILWORK. Every show is another chance for us to pull people in and we take that very seriously. This line-up is by far the most professional I’ve witnessed since I joined the band. In the end though, it’s all about passion for music and having a good time. So with an album as strong as “The Panic Broadcast”, we’re just stoked!