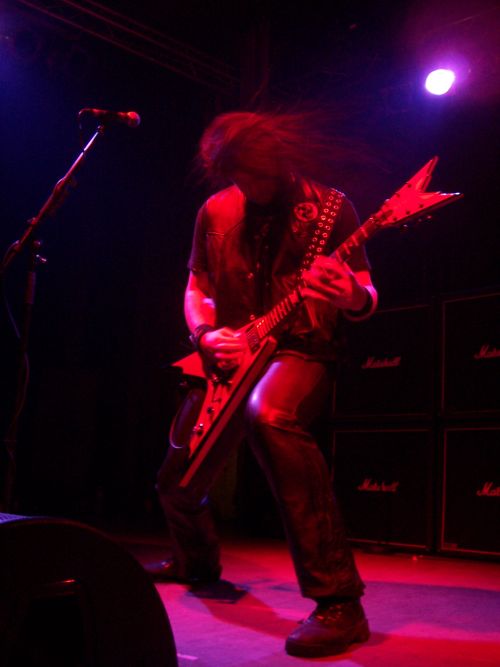 Q: Can you first of all tell me something about how the band got together?

P: The band started a couple of years ago and Travis pretty much started the band, and Matt came in a week after that, it was reallymore of a school band thing. But you know, a lot of young bands start out that way. At the same time I was doing my own thing in South Florida, and only joined when the former bass player quit. But we had already met a couple of times, had been crossing paths some times, and down the road I ended up being in the band. The thing I was doing wasn`t a serious thing anymore, and I wanted to join up with people more serious, and at the same time they needed a new bassplayer because Justin went another way.

Q: So the band already had a plan to get things really going back then?

P: Yeah, yeah, they had big things planned. At the point when I joined the band we all wanted to take it to the next level. And then all that Roadrunner stuff happened and that. The original bass player, he was not that into touring and all that stuff, I mean they had been friends and started out that way, but he was not totally comitted. The others and I were not really friends then, but I fit into the band right away, and so we could fulfill the plans we had had for the band.

Q: You are all still very young, all in your early twenties. How do other people or musicians react to your early success? 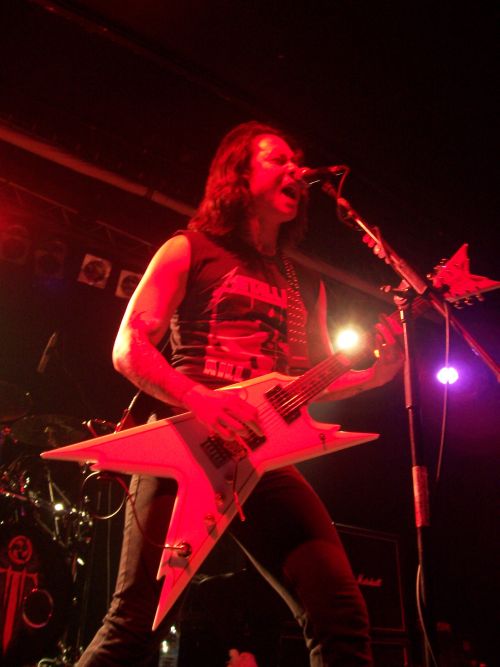 P: Well, we know how to play our instruments well, and were getting better live, and we have been given the opportunity to get something started at a very young age, so we already have had a longer career then many other bands. I play bass since I was seven, and I mean our first record was released in 2004. We dont get envied especially for being so young and successful, but we get envied for a lot of things, and you get it from people that are in bands, and people that are not in bands, from people that dont have that much success or from people who are doing good but do not get the chances that we have had. The last two years really, we have been going on and on and on. I mean, its crazy. Were doing these shows here right now and we are back in October with Arch Enemy, and we got to play Rock am Ring two years in a row pretty much, and we have moved from the small stage to the Mainstage. Its awesome. For me its success, but people often get the misconception that at this level bands make millions of dollars, but we dont. We really dont make much money actually. We do keep getting better and better, but it has been a provess of about 6 years, and we were never a band that would go on to make this one hit, get millions of dollars, and then stop. We wanna keep building it up.And hopefully this next CD is really gonna break us through.

Q: How is the work on the album going?

P: I wish I could show it to you, but I really cant, sorry. 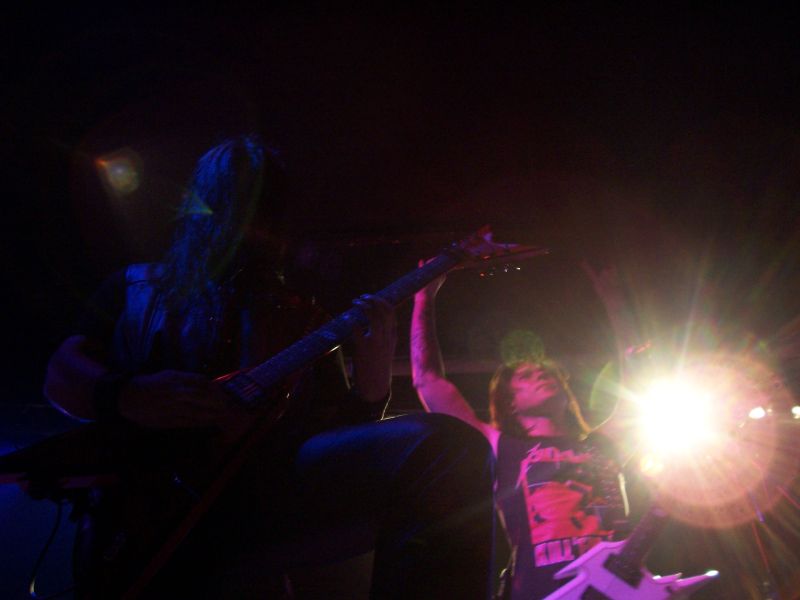 Q: Too bad! But maybe you can tell me something about it and how its gonna sound.

P: Well play a song off of the new record tonight though! Its very dynamic. Ascendancy, when you listen through it, is definetely, all the songs have a similar thing or theme to it, and on the new record each song is very individual, from song to song it keeps changing. Not in a bad way, but we keep moving more and more to a traditional Metal formula, especially vocally. A lot more singing and not so much screaming anymore.

Q: When will it be released?

P: I believe its like the first week of October, but I am not dead sure.

Q: So then, how does song writing work in the band?

P: We pretty much do everything on our own, each one individually. There is only one song that is written by more than one person. The others are all written by one single person. I wrote a couple of songs, Matt wrote some, Corey wrote some.

Q: What about the lyrics?

P: Matt writes the lyrics. The way I think about it is, that everyone could write lyrics for a song, but in the end he is the one singing them. So he really has to feel what hes writing and singing. The band I was in before, I wrote the lyrics. And I definetely always like to help out, and give my suggestion if think something should be changed. But concerning the concept of the lyrics I think that Matt really needs to think about it himself, and sing about what he feels strongly about  coming from the heart.

Q: How would you see the importance of lyrics concerning the songs?

P: I think everyone has their own opinion about this, some people like lyrics more than music. Me personally, I like the melody of words, the music of it. Thats just the way I am being a musician, I am more into the music and melodies. But theres definetely a lot of people who are really into the lyrics. And we as a progressive band, we like to do new things, not really drastuc, but new. There are a lot of bands that simply re-do what they have already done, they stagnate or are afraid to do something new.

Q: Why did you name the new album The Crusade?

P: Pretty much because all of the CDs kinda had a little thing to its own concerning the band. Ember To Inferno was kind of the band going from nothing to something, and Ascendancy was really our rise throughout the last year. The Crusade id kind of like a metaphor for spending about two years work on it, touring, going around the world, getting new people into us every time we play a new show. It has nothing to do with real crusades or anything religious.

Q: What about the metaphor of you going on tour and having to drive through a thunderstorm? 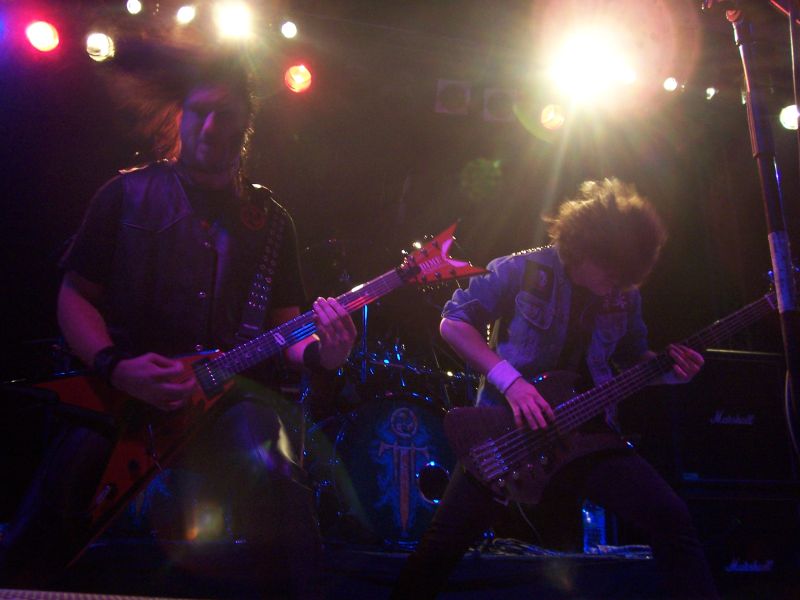 P: Oh, man. That was just blown out of proportion! It has just gone way to far now. We regret saying that we ever did that!

Q: So, lets leave it at that then, haha. Tell me something about your future plans.

P: Well, apart from the album and more tours we will do another European tour with Iron Maiden this fall, so we will come back to Germany. Pretty much our plans are to go all over the world. There are many places we havent been yet.

Q: So is there still a life apart from music?

P: Well, not that much. Most of our lifes consists of touring. Bands that are bigger have the luxury of affording to take a year off or so. But we cannot take off for more than a month or two because people are going to forget about us. So we have to keep going on tour and make sure that we are on peoples minds.

Q: How do parents and friends support your job as a musician?

P: My parents are 100% behind me, they support me in every which way.

Q: So your life pretty much only consists of music

P: Yeah, pretty much. It always has. Its touring, writing, rehearsing. We often practise the songs for hours alone and then meet up. And you have to. If you want to get better, you just have to do that. And its hard to practice when we are all together. I usually pick up my bass at home and try to play things I am not that good at, and try to get better. And on the new CD we got to do a lot more things that we always wanted to do. I got to add a lot of stuff that I could not put in on the last CD, and I think its pretty evident once you hear it. The new CD has a lot of new ideas on it, but still combined with the old Trivium sound.